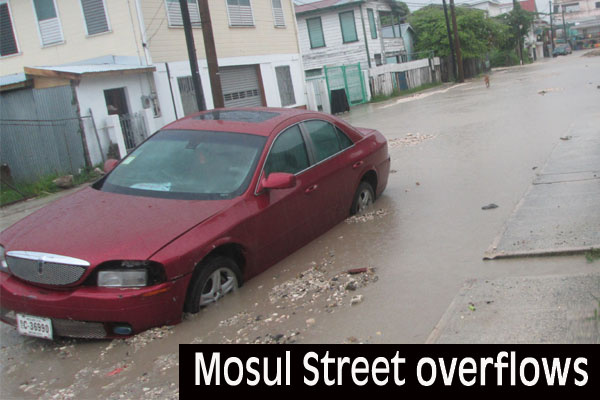 Rains again are battering the old capital and the drainage system, it seems, has not been able to function well enough to keep city streets from being inundated.

At about 1:30 this afternoon, the entire length of Mosul Street connecting Cemetery Road to Vernon Street was flooded to a depth of about 5 inches, and even deeper in other areas of the street. A car on the street also got bogged down in a trench that was dug by a utility company, but which was covered with the water that engulfed the street, and was thus not seen by the driver.

In an interview on Wednesday, August 28, Mayor Darrell Bradley told the media that he is aware of the inadequacy of the drainage in the city, but that the bad drainage that has resulted in the flooding is actually caused by old streets.

While Bradley acknowledged that the old drains are causing the problem in the city, he stated that the council does not yet have the money to address the problem. They are first concentrating, he said, on completing the construction of 100 streets in the city – a process that is well underway, but the mayor promised that they will be exploring possible methods of improving city drainage as soon as the citywide construction project in which they’re engaged is done.

The Council will then, after moving on from the construction work, ensure that culverts are properly constructed and flushed out, the mayor pledged. He went on to explain that the old culverts were not cleaned and flushed out, and are blocking the proper flow of water.