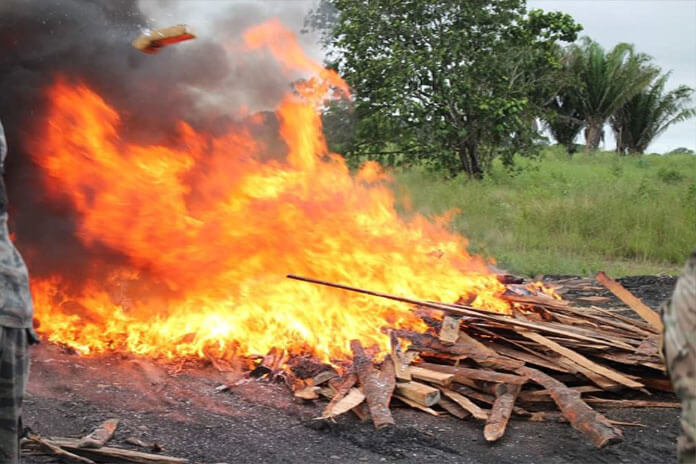 BELIZE CITY, Tues. Nov. 16, 2021 — Following the transfer of ACP Marco Vidal from his post at the helm of the Command Operations Strike Team after three members of that team were arrested for alleged involvement in the landing of a drug plane in Bladen Village, Toledo, ACP Alford Grinage has been tasked with heading that team.

One of the new Commander’s first tasks was to oversee the destruction of the drugs that were confiscated following that drug bust, and according to Grinage, it was determined that, due to the risk of possible intervention by international drug operators, the destruction would take place as soon as possible, and as covertly as possible — without media reps observing the process, as is typically done. On Tuesday morning, the Belize Police Department transported roughly eight hundred and two kilos (23 bales) of cocaine to an undisclosed area to be destroyed. According to ACP Grinage, over seven hundred parcels of the cocaine were processed by scenes of crime, forensic and narcotic officers before being set ablaze.

ACP Grinage said that the team of police personnel left in the early hours of the morning and began with retesting and the subsequent burning of the cocaine between 8:00 a.m. and midday. The objective, he shared, was to proceed with the disposal so as to get the officers securing the contraband back to their daily work routines.

According to ACP Grinage, representatives from the National Forensic Science Service, as well as a Magistrate, a Justice of the Peace, and members of the Prosecution Branch and Drug Enforcement representatives as well as the arresting officer who was on duty on November 4, were present to observe the destruction of the cocaine.

When later questioned at a weekly police press briefing, Grinage further remarked, “We will try our best to ensure that we maintain integrity within the Police Department. But at the same time, dealing with it, me personally being involved in the investigation, it’s heartbreaking to know that persons that you trust, especially the ones that are named at this point in time in connection with the last landing. It was persons that were very close to the Operations office, which I now hold, so it is something that I will be looking at to ensure that reoccurrence does not occur.”