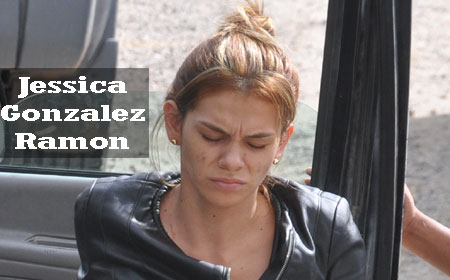 BELIZE CITY, Mon. Oct. 31, 2016–A Colombian woman visiting Belize for the first time on Friday, October 28, got into trouble with the law after landing at the Philip Goldson International Airport, and was taken into police custody and charged with damage to property and common assault against an immigration officer.

In court this afternoon, Jessica Gonzalez Ramon, 22, was fined $250 plus $5 cost of court for common assault and was ordered to pay $1200 compensation to immigration officer Adi Pacheco for breaking her eyeglasses, valued at $975.

Ramon was scheduled to meet her American boyfriend Jacob Jackson on San Pedro, where the two had planned a vacation. Jackson arrived in Belize from the US one day before Ramon, on Thursday.

Instead of meeting his girlfriend on San Pedro, however, Jackson met her in the precinct of the Belize City Magistrate’s Court this morning after police brought her to court to be arraigned on the two summary offenses.

Ramon felt slighted when she was taken into a room to be searched and alleged in court that immigration officer Adi Pacheco told her that she was going to San Pedro to sell her body.

In her report to police, Pacheco, who first came to national attention when it was revealed that she was the officer at the Immigration Department in Belmopan who took the Won Hong Kim application from the disgraced Elvin Penner, said that she was on duty at the airport and had to call one of her co-workers to assist her with Ramon.

Pacheco, who is also pregnant, told police that Ramon jumped at her and grabbed her by the hair, knocking her glasses over her face. Her co-worker, Patricia Hyde, assisted her in getting Ramon off her.

Pacheco was taken to a doctor who examined her and determined that there was no visible injury and that her pregnancy had not been affected.

Magistrate Rodriguez asked Ramon why she attacked the immigration officer, and if she did not see that she was pregnant.

Ramon replied that she had not noticed that the officer was pregnant.

Magistrate Rodriguez again asked Ramon why she attacked the officer.

Ramon said that she felt disrespected by the way the officer was treating her.

Magistrate Rodriguez told Ramon, “I don’t accept anyone to treat an immigration officer the way you did.”

The court was concerned about whether Ramon would have had the means to pay a fine if the court imposed such a penalty. A Colombian diplomat who was in court informed the court that Ramon’s boyfriend would pay her fine, so Magistrate Rodriguez sent the court orderly to bring Jackson into the courtroom.

The two offences with which Ramon was charged both carry a maximum penalty of a fine of $3,000 or imprisonment for a term not exceeding 12 months.

Before imposing the fine and requiring that she pay Pacheco compensation, Magistrate Rodriguez told Ramon, “I remind you that I am not pleased with what you did to one of our immigration officers.” The Magistrate told Ramon that if she came back to his court, he would throw the book at her.

Ramon apologized to the court for attacking the immigration officer.

Magistrate Rodriguez explained to her that out of the compensation of $1,200 that she was ordered to pay, $975 is for Pacheco’s glasses and the remainder is to compensate her for the fees that she paid to the doctor whom she had to consult after the incident.

Both the compensation and the $255 fine were ordered to be paid forthwith. Jackson paid the fine, but it is not known if Ramon was released on time to return to the airport to get her passport stamped and to collect her luggage.

It was also not brought out in court whether Pacheco had indeed called Ramon a prostitute.