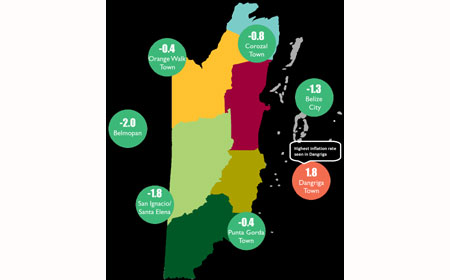 BELIZE CITY, Thurs. June 25, 2015–The latest report issued by the Statistical Institute of Belize (SIB) states that nationwide, the inflation rate was down in May, although the municipality of Dangriga stands out as the only municipality in the country that saw a rise in inflation, meaning that consumer prices were 1.8% higher there this May, compared to the same time last year. This contrasts sharply against the national inflation rate of -0.9%, which means that nationally, consumer prices were on average almost a full percentage point lower than they were twelve months ago. 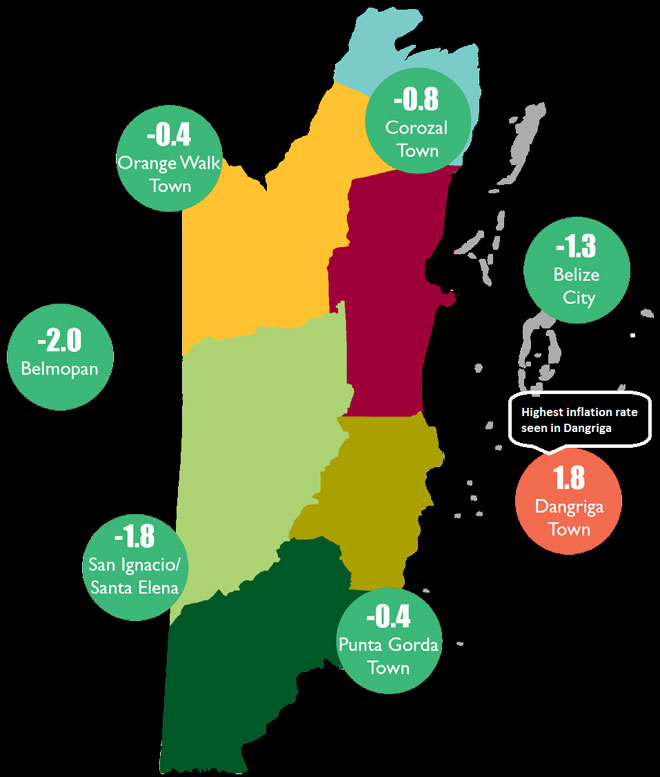 The greatest price ease was seen in the “transport” category, which fell by 7.4%, driven by falling fuel prices.

The SIB said that “…the average price per gallon of premium gasoline, regular gasoline, and diesel fuel all fell by more than $2.50, or well over 20 percent, in comparison to the same month last year.”

Furthermore, international airfares were significantly lower, declining by almost one fourth compared to last May.

Cooking fuel, or liquefied petroleum gas (LPG), was also substantially cheaper in May, with the average price per 100-pound cylinder falling from almost $120 last May to $111 this year.

Although prices in the food category remained unchanged, on average, beef prices were up by more than 10 percentage points, while red kidney beans prices were down by more than one third compared to last May.

The cost of consulting a doctor went up by about 5% over last year’s prices.

While Dangriga saw the highest inflation rate in May—just as it did in April—Belmopan saw the largest drop of -2%, followed closely by San Ignacio/Santa Elena with negative 1.8%.
The SIB also reported on the latest trade data for Belize, which reveal that May imports were valued at $162 million, more than triple the country’s exports for the same month, which were valued at $50.6 million. Of note is that both export and import figures for May 2015 represent a decline from figures reported for last May.

According to the SIB, imports in the ‘Mineral Fuel and Lubricants’ category dropped by $13.4 million from $39.4 million to $26 million, owing both to a decrease in the quantity of fuel imported as well as lower fuel prices on the world market.

An $8.9 million decrease was also recorded in food imports, due to a sharp decline in wheat and corn seed purchases during May.

Meanwhile, purchases of goods destined for the Commercial Free Zone declined by almost $7 million, from $26 million to $19 million, attributable to decreased purchases in clothing and textile products.

“Diminished sales for most of the country’s major exports contributed to this steep decline, including sugar, crude petroleum and citrus concentrate,” the SIB said.

More specifically, it revealed that sugar exports declined by $10 million, from $15 million to $5 million, because only bagged sugar was shipped during the month of May, with bulk sugar for the month being combined with that of June for one large shipment.

This fall in sugar exports translated to a decline of $11.3 million in the value of Belize’s exports to the UK, from $20.7 million last May to $9.4 million this May, the SIB said.

The value of Belize’s crude oil exports dropped by $4.5 million this May. Although the country exported the same quantity of crude this May as it did last May, it earned only $6.5 million for those exports versus $11 million last year, due to a fall in world market prices.

Meanwhile, citrus concentrate exports decreased by $1.6 million to $12.1 million, while a negligible reduction in banana exports was recorded, the SIB noted.

Excluding trade within the Commercial Free Zone in Corozal, this resulted in a visible trade gap of $377.4 million for January to May 2015.