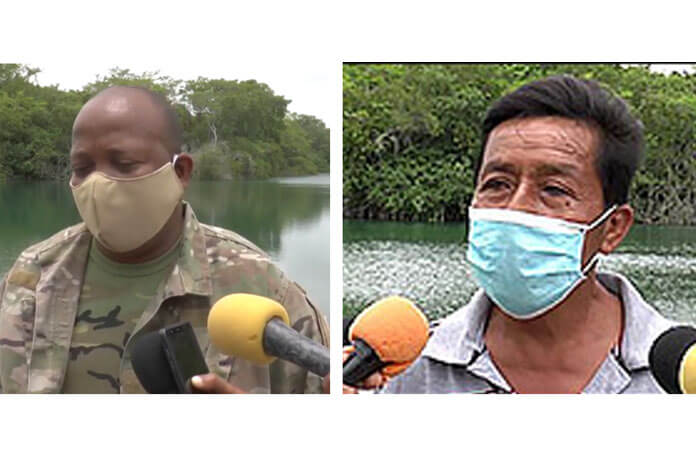 SAN VICTOR, Orange Walk District, Fri. May 22, 2020– After getting several reports that villagers of San Victor and Santa Cruz, located in the Orange Walk District along the banks of the Rio Hondo River at Belize’s border with Mexico, were going across frequently to the Mexican border towns to buy cheap goods and to engage in contraband, the Commissioner of Police, Chester Williams, along with media and high ranking police officers, visited the two villages today, where he laid down the law.

These two Mexican towns are popular shopping areas for the villagers of San Victor and Santa Cruz. The two Belizean villages, however, is dubbed the epicenter of contraband due to the easy access to Mexican goods, which can be bought cheaper and brought over to Belize and sold for a substantial profit.

Compol Williams reminds that Belize is presently free of COVID-19 infections and all is being done to maintain this COVID-19 free status, and measures are in place through the Emergency Powers Safety Regulation, and the country is in a State of Emergency.

A curfew is in effect from 8:00 in the evening to 5:00 in the morning in an effort to combat the spread of the COVID-19 pandemic in the country.

While the neighboring countries of Mexico and Guatemala have high rates of infections, Belize has zero infections of COVID-19.

Compol Williams reminded the villagers that they should not go to these countries due to the high risk of unknowingly contracting the virus and bring it back into their villages, from where the infections can then spread over the country. Going to these countries is illegal, he said.

The Compol said that the frequent visits of the villagers to the Mexican communities are worrying.

Linea De Fuego, a leading newspaper of Chetumal, Quintana Roo, Mexico, reported today that after confirming 7,633 deaths from COVID-19, Mexico exceeds Iran in number of COVID-19-related deaths and is positioned in 9th place on the list of ten countries in the world with the most COVID-19-related deaths. Iran currently has recorded 7,000 deaths, according to data from Johns Hopkins University.

Linea De Fuego reported that, in a press conference, the Mexican Ministry of Health confirmed 71,105 positive cases of coronavirus.

According to Johns Hopkins University, the world has registered 5 million 490 cases of COVID-19.

The United States, Brazil and Russia are the countries that record the most COVID-19 cases.

Compol Williams said that if anyone is seen or found coming back into Belize illegally, they will be arrested and charged for the violation of the Emergency Powers.

Compol Williams said that a joint Customs police and soldiers of the Belize Defence Force will carry out operations in the villages to stop people from going across the river to Mexico, and to stop Mexicans from coming over into Belize, and the  operations will be conducted indefinitely. The Coast Guard will also patrol the river.

Compol Williams said that even before the COVID 19 pandemic, the Customs Department was aware of the illegal shopping in these towns, but since jobs are scarce, villagers were given a run as long as the purchases are for their home consumption, but now due to the COVID-19 pandemic, the villagers are forbidden to go across the river to the Mexican towns.

To help them, The Ministry of Human Services will be requesting, through the Chief Executive Officer (CEO) Judith Alpuche, that the ministry steps in to help the people with the food distribution program

Concepcion Cobb, the San Victor Village Chairman, with whom the Commissioner also spoke, told the media that he understands and will cooperate with the efforts to help protect the village from the COVID-19 virus, and will do what he could to make the people also understand and cooperate with law enforcement officers.

Compol Williams said that he understands that going across to Mexico to buy food is a way of life for the villagers, but that cannot be done now because of COVID-19.