Confusion over reopening of school 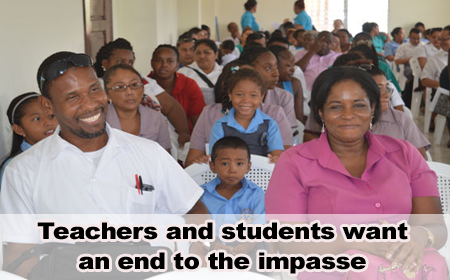 BELIZE CITY, Thurs. Dec. 29, 2016–Many parents and teachers have been pressing to definitively find out when school will reopen, in the face of conflicting messages coming from two camps: the Belize National Teachers’ Union (BNTU) saying, on the one hand, that teachers are due one more week of vacation, and so should not return to school until Monday, January 9, and the Government, on the other hand, insisting that vacation should be terminated on Tuesday—right after the New Year—for the early reopening of school to compensate for time lost during the October strike.

The impasse affects parents and students attending government-aided pre-schools, primary and secondary schools, as well as educators at those institutions.

“In an effort to allay all confusion and misunderstandings on the reopening of schools, the Belize National Teachers’ Union reiterates that our children and teachers deserve and are entitled to their three weeks Christmas vacation as stated in the Education Rules. Therefore, classes should resume on Monday, January 9, 2017,” the BNTU said in an official statement issued on Wednesday.

The BNTU said that it is becoming concerned and tired of managements which believe that teachers are “pawns.”

“We say, ‘include us in the discussion.’ That is our just demand!” the BNTU appealed.

It said that school managers—not the Ministry of Education—should plan, alongside teachers and implement the make-up time to compensate for the 11-day strike.

In a rebuttal issued today, the Ministry of Education said: “Teachers and parents/guardians of students attending pre-primary, primary and secondary schools are reminded that school reopens on Tuesday, January 3rd, 2017. School bus runs will be operating from this date.”

It said that managing authorities of both primary and secondary schools have met in consultation with the Chief Education Officer in the Ministry, Dr. Carol Babb, and they unanimously agreed to adjust the school calendar to make up for days lost as a result of the protest.

It added that the school calendar has been adjusted to accommodate a total of 6 days: 4 days from January 3-6, 2017 and another 2 days from April 10-11, 2017, over the Easter break.
With this adjustment, the Ministry claims, teachers will be able to enjoy their full 30 working days of vacation leave to which they are entitled each year.

Additionally, the Ministry claims that teachers who were at school during the strike but are now required to work on these newly added dates will be granted a salary bonus.

According to the Ministry, the BNTU has no mandate to suggest when teachers should be returned to classes. Instead, it claimed that such mandate is that of the managing authorities, with the approval of the Chief Education Officer.

While there has been much friction between the BNTU, the Ministry of Education and the managing authorities, the voice of students have rarely been heard.

According to Vanessa Jones, 16, a fourth form student at Stann Creek Ecumenical High School, she has no clue when classes will resume.

“I don’t know what to do. I am confused,” said Jones, who told our newspaper that she is aware that there are two conflicting dates circulating for when classes are to resume.

The business major told Amandala that she hopes the Ministry of Education and the BNTU, “sort out their business, because I, as a 4th former, don’t want to be affected… like not being prepared for CXCs.”

When our newspaper spoke to a Sadie Vernon fourth form student, Jeremy Nunez, 17, he told us that he is concerned about his studies—but even more concerned about his country.
According to Nunez, the teachers are able to come to an agreement without being intimidated by the Ministry of Education.

Nunez said he will be attending classes on the 9th of January, but in the meantime he will be reviewing his notes.