Consumer prices down in 2015, but meat prices spike 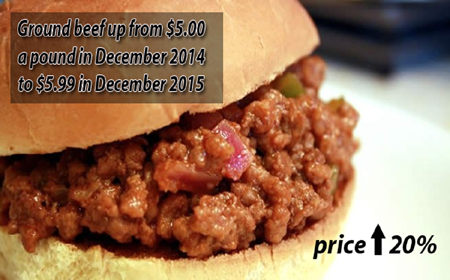 BELIZE CITY, Wed. Jan. 27, 2016–A reduction in world crude prices and fuel costs resulted in an 8.7% decline in consumer fuel prices in Belize during 2015—offsetting price increases experienced on the home front for basic food commodities, such as meats, particularly ground beef, which rose by almost 20% from $5.00 a pound to $5.99 a pound.

Overall, though, consumer prices fell by about a penny on the dollar during 2015, with prices falling in December by 0.7% over last December, according to information released today by the Statistical Institute of Belize (SIB).

For the year 2015, the average national inflation rate was negative 0.9 percent. During that month, fuel prices were comparatively lower than the same time last year.

According to the SIB, “The price of premium gasoline was down by about 10 percent, while that of regular gasoline was 16 percent lower. Diesel fuel was more than 24 percent lower than it was in the same month, of 2014.”

The SIB added that these decreases, combined with a drop of more than one third in international airfares, resulted in an overall decline of more than 8 percent in the ‘transport’ category when compared to December 2014.

While there was some ease on that front, food prices remained virtually unchanged, notwithstanding increases in the price of all types of meats, eggs, milk and other basic commodities.

These increases were offset, though, by decreases in the price of red kidney beans, onions and LPG cooking fuel.

However, prices increased in the southern municipalities, by 2.7% in Dangriga and 1% in Punta Gorda.

“Home rental prices and food prices were among the highest in these areas,” the SIB reported.

Consumer prices plunged the most in Belmopan, which recorded an inflation rate of negative 2.9%, largely due to lower prices recorded for food and home rental costs.