Another cop accused of extortion in San Pedro 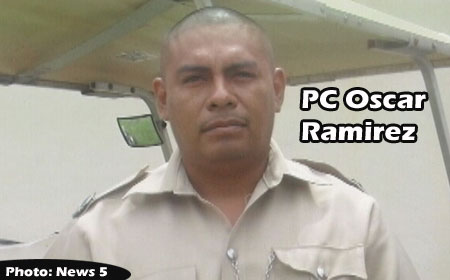 PC Ramirez was taken to the San Pedro Magistrate’s Court today, where he was released on bail of $3,000 and ordered to return to court on Tuesday, November 18.

Police charged that PC Ramirez demanded $700 – of which he collected $600 – for the release of a woman who was in custody for traffic offenses.

On Tuesday, September 23, Mirna Judith Berganza, a resident of San Pedro, was being detained at the San Pedro Police Station for traffic offenses when her son, 17, and a friend of his, both of San Pedro, went to the station to try to get his mother released.

Her son talked to PC Ramirez, who allegedly agreed to release his mother if he was paid $700. The boy told investigating officers that he did not have $700, but that he paid the policeman $600 – all he had, and Mirna Berganza was subsequently released after spending four hours in custody.

PC Ramirez has since been interdicted from duty and will be tried internally by the Police Department through a special police court called a police tribunal, which can impose penalties, including dismissal from the department, if the officer is found guilty of the offense.

ASP Glen Rivero, Officer in Charge of the Professional Standards Branch of the Police Department, said that the department has a zero-tolerance stance toward crime and corruption within the police force.

On July 24, PC Elvin Nah was charged with extorting $400 from a man he had busted with drugs – telling the man he would release him from custody without charges if he paid him the requested amount. The man reportedly handed over eight $50 notes to Nah and walked out free from the station.

Other police officers learned of what happened and launched an investigation, and PC Nah was identified as the policeman who released the man from their custody, and he was taken to court. Nah has since been placed on interdiction from duty pending an initial trial by the police tribunal.