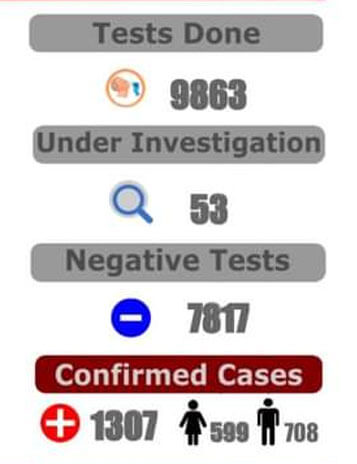 BELIZE CITY, Tues. Sept. 8, 2020– The COVID-19 epidemiological curve in Belize continues to rise steadily. At this time, health officials cannot determine when that curve will peak, since a relatively consistent number of cases continue to emerge across the country.

Flattening the curve is only achieved through strict and effective community mitigation. This means citizens playing their part to limit the spread of the virus by adhering to all the rules and protocols that have been put in place.

Recent data released by the Office of the Director of Health Services (DHS) on September 7 revealed 46 new COVID-19 infections. This takes the total number of confirmed cases to 1,307.

During an interview with local media, Dr. Marvin Manzanero, the Director of Health Services, said that current research suggests that immunity against Sars-Cov2 lasts only about 4 months after recovery.

Manzanero also compared the recovery time of severe COVID-19 infections to the time taken to recover from dengue hemorrhagic fever. At this time, 16 COVID-19-related deaths have been confirmed by health officials.

The most recent death to be announced was that of a man in his late 70’s, who succumbed to the virus while receiving treatment at the Northern Regional Hospital.

Last week, a resident of San Pedro who was intubated at the KHMH for a week also died as a result of respiratory failure, caused by COVID-19.

This person has been identified as Cecilia Tzib.

Also, a male resident of Biscayne Village who died on arrival at the KHMH tested positive for the coronavirus. Reports are that the man was being transported to the hospital due to extreme fatigue. A Genexpert rapid test was administered, but came back negative, and as a result, the routine PCR test was done. This test showed that he was infected with COVID-19.

According to Dr. Manzanero, a field validation for an antigen rapid test will be conducted in Belize City. The roll-out of this test was delayed by Hurricane Nana.

The recent breakdown of cases continues to show a spread across the country. On September 7, of the 46 cases found, 7 were identified in the Corozal District — 5 in Patchakan and 2 in Caledonia.

Twelve (12) new cases were found in the Belize District — 1 in San Pedro, 5 in Caye Caulker, and 6 in Belize City.

The persistent message from the Ministry of Health is for all precautions to be taken to avoid contracting the Sars-Cov2 virus, which leads to COVID-19 infection. The amended Quarantine Act obliges all citizens to practice strict social distancing and limit public gatherings.

In a post on social media, the office of the DHS said, “We are also deeply troubled by the ongoing reports of social gathering and events across the country that involve members who aren’t from the same household, and this includes reports of those who are positive still being out in public and attending social events.

“While all relevant partners continue to follow these cases and reports, it remains a monumental task if we don’t have the cooperation from all, as our human resources are being stretched to the limit with also ensuring full compliance from all cases.”