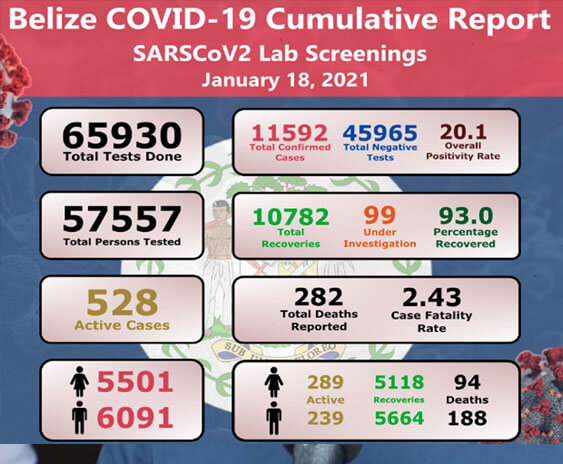 BELIZE CITY, Mon. Jan. 18, 2021– Since our last COVID-19 update, a number of new initiatives and changes have been introduced in the country to fight against this deadly virus. The Ministry of Health and Wellness (MOHW) has decided to exercise more control over testing within the country. Now, by virtue of SI number 2 of 2020, all persons desiring to import any COVID-19 test or related equipment must first seek the Ministry’s approval. Also, persons or entities wishing to offer COVID-19 testing must now also seek approval from the MoHW.

Also, as testing continues, the country is now in partnership with a Texas-based university, Baylor College, in an effort to carry out genotype testing within the country, in order to identify the various COVID-19 variants that are currently within Belize. This partnership will determine whether the new UK variant has yet made its way within the borders of the Jewel.

Recent data shows that a total of 11,592 cases of COVID-19 have been confirmed in the country. Of that amount, 528 cases remain active and there have been 10,782 recorded recoveries. To date, a total of 282 COVID-19-related deaths have been recorded within the country of Belize. On January 18, a total of 12 new cases were identified from a batch of 199 samples. 88 persons were marked as recovered, and 1 person passed away on this day. Our fatality rate stands at 2.43%, and 93 % of persons in Belize who were infected with the virus have recovered countrywide.

Data compiled for January 16th and 17th has revealed a total of 51 new confirmed cases from a total of 805 tests processed. Of those new cases, 24 were found in the Belize District, and 21 of the 24 cases were identified within Belize City. A total of 44 persons were categorized as recovered, and no new deaths were confirmed on those days.

On January 15, a female person from the Orange Walk District passed away. A total of 558 tests were conducted on that day, and 73 new cases were found across the country. Nine persons who were infected with the virus, reportedly recovered on that day.

Fifty-three new cases were identified from a batch of 383 samples processed on January 13. One death was recorded: a male person from the Stann Creek District. A total of 67 new recoveries were confirmed on that day as well.

In the United Kingdom, deaths related to the coronavirus are increasing. Over 600 new deaths were recorded in that country on Sunday, January 17. Reports are that over 89,000 persons have died within 28 days of a positive COVID-19 test result in that country. The number of new infections continues to rise in that country as the more contagious COVID-19 variant continues to spread on the British Isles. In the United States, the death toll has reached a staggering 400,000 total. In September of 2020, that number stood at 200,000, and just a few months later, by mid-December, it increased to about 300,000 deaths. Globally, over two million people have been killed by the coronavirus.

The Ministry of Health and Wellness in Belize continues to urge all persons to wear a mask at all times in public, to practice consistent social distancing and to wash or sanitize hands frequently. The Ministry also asked all persons to stay at home unless they are conducting essential business.

BELIZE CITY, Fri. Feb. 19, 2021-- The trustees for the pension scheme at the Belize Tourism Board are currently under investigation for the possible...
Read more
- Advertisment -