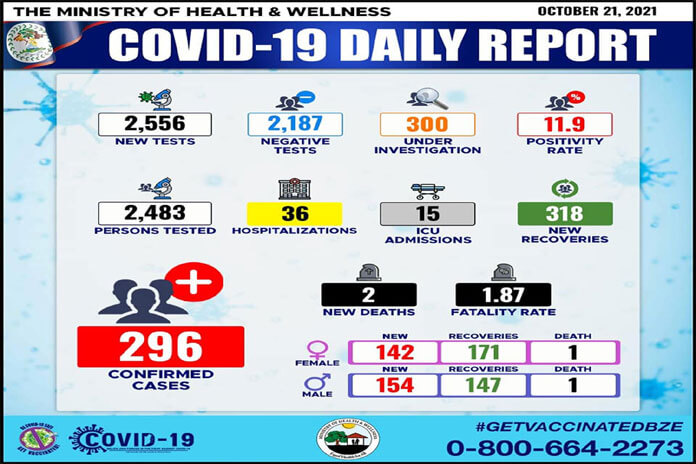 BELIZE CITY, Thurs. Oct. 21, 2021– This week the Government of Belize opened additional COVID-19 testing sites to the public across the country. The purpose of this expansion of testing availability is to separate the truly sick persons infected with the virus from those who merely have been in close contact with infected persons or those who simply need to present a negative COVID-19 test in order to enter a government building.

The first sites were opened in Belize City and Belmopan a couple of weeks ago, and Dr. Melissa Diaz, Deputy Director of the Central Health Region, said that these new testing facilities at these locations have already improved the surveillance and management of positive cases by the Ministry of Health and Wellness.

Over the past 8 to 10 days, the number of Covid-19 infections across the country has been slowly decreasing, but this by no means indicates an all-clear, with the positivity rate remaining between 10% and 15 %. The indication that a curve has flattened is seen when a country records a positivity rate of 5% or less within two cycles, each 14 days in length.

As a result, citizens must keep their guard up and not lose focus, says Dr. Diaz. The Health Ministry is reporting, however, a substantial disparity between the number of people who have received their first dose of the vaccine and the number of persons who have gotten their second dose.

Today, October 21, 2021, a total of 296 new cases of the virus were found from 2,556 samples processed. The Ministry also recorded 318 recoveries and a positivity rate of 11.9%%. Two new deaths were recorded today, one man one woman, from Orange Walk and the Belize District respectively, one unvaccinated and one with only one jab.

On Wednesday, October 20, a total of 180 new cases of the virus were identified from the 1,531 tests processed across the country. Fifty persons were hospitalized — 21 of whom were placed in the Intensive Care Unit. A 12% positivity rate was recorded and 5 new deaths were announced on that day. Additionally, there were five Covid-19-related deaths. Two of these persons were from Cayo, 2 from Stann Creek, and 1 from Orange Walk. All those persons were unvaccinated.

Data from Tuesday, October 19, shows 2,252 tests processed and 321 confirmed cases. Forty-six persons were hospitalized, with 17 being placed in an ICU. The Ministry identified 232 recoveries and a positivity rate of 14.6%. One new death was recorded on that day, a man from Toledo who had received one 1 dose of the COVID-19 vaccine.

The data from over the weekend shows a total of 3,203 tests processed and 48 hospitalizations recorded, with 14 of those hospitalized persons needing intensive care. The positivity rate that day was 14.9%, and 447 recoveries were recorded. Of the four deaths recorded on that day, 1 person was from Belize and three from Orange Walk. None of those persons were vaccinated.

And on October 15, 1,894 tests were done across the country, with 228 new confirmed cases being recorded. Of the 48 hospitalizations, 12 were in need of intensive care. The positivity rate that day was 12.5%. Four new deaths were also recorded — two women and two men. Again, all persons were unvaccinated.