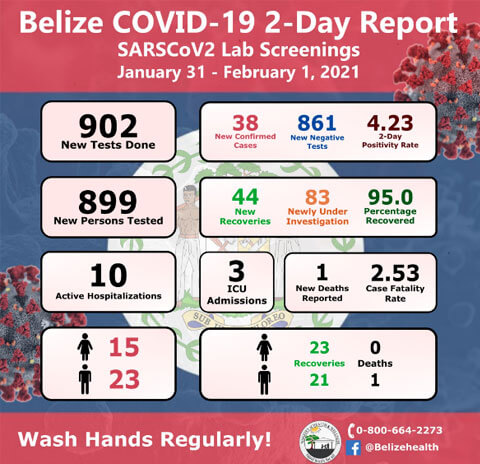 BELIZE CITY, Thurs. Feb. 4, 2021– In our last update, we reported on the COVAX facility’s decision to send over 35.3 million doses of AstraZeneca’s COVID-19 vaccine to 36 Caribbean and Latin American countries, Belize being one on this list. At this time the World Health Organization is completing its review for an emergency use listing.

In a press conference hosted by PAHO this Wednesday, they announced that some Pfizer vaccines would be sent to some countries in the region — those areas with very high mortality rates, since there are only 1 million doses to spare at this time.

PAHO estimated that the Americas will have to immunize no less than 500 million people to get the COVID-19 pandemic under control. This first rollout of a little over 35 million doses of the vaccine will only be the start of what is expected to be a process that could go on for an extended period.

Last year the Director of Health Services, Dr. Marvin Manzanero, announced that the country would be receiving enough doses of the vaccine initially to immunize about 30% of the population. The first set of vaccines should be in the country by April, according to the Ministry of Health and Wellness.

The acting Director of Health Services, Dr. Melissa Diaz Musa, has also confirmed that the AstraZeneca vaccine will be rolled out in the country. During the last press conference held by the Ministry Of Health and Wellness, Minister Michel Chebat outlined that a team from inside the Ministry has already drafted the National Vaccination Plan, which is currently being reviewed before being rolled out to the public, prior to which there will be a comprehensive education campaign.

At this time our fatality rate stands at 2.55 % — with 306 deaths having been recorded by the Ministry of Health and Wellness since the start of the pandemic in Belize. At this time there are about 250 active cases of COVID-19 across the country. A total of 11,452 persons, which is 95.4% of all infected persons in Belize, have recovered. In total, so far, 73,199 COVID-19 tests have been conducted in the country, and a total of 12,008 confirmed cases have been recorded in Belize.

On Thursday, February 4, 2021, 30 new cases of the virus were discovered in the country after testing. The teams at the Central Medical Laboratory processed 868 new tests and recorded a positivity rate of 3.50. Also on Thursday, 39 new recoveries were recorded and a total of 12 persons were hospitalized, due to illness caused by the COVID-19 virus. Four are currently in need of intensive care. Fortunately, no new death was recorded on that day.

On February 3, three new COVID-19-related deaths were recorded across the country. Two women and one man passed away. The fatalities were recorded in the Corozal, Belize, and Cayo districts. On that day a total of 22 new COVID-19 cases were recorded after the results of tests done on 1338 persons were returned — a daily positivity rate of 1.65 %. The Ministry of Health and Wellness recorded about 35 new recoveries and 11 hospitalizations that day. About 361 possible cases of infection were under investigation

On February 2, a man from the Belize District died from coronavirus. The Ministry of Health and Wellness recorded 12 new cases of the virus on that day and conducted about 199 tests. Also, there were 25 more recoveries.

The Ministry of Health and Wellness continues to urge Belizeans to comply with the prevention protocols that are in place. The country has seen a marked decrease in the number of cases. The Ministry, however, is still on high alert, as new COVID-19 variants have emerged in other parts of the world. At this time, genotype testing is being conducted on samples in Belize to track any possible variant that may be in the country.

Globally, as of Thursday, February 4, 2021, a total of 103,989,900 cases of COVID-19 have been confirmed across the world. A total of 2,260,259 fatalities have been recorded. The United States of America, India, and Brazil are the three countries that have seen the greatest number of recorded cases since the pandemic began. Although the numbers are decreasing, the USA is still recording hundreds of thousands of new cases each day.