BELIZE CITY, Thurs. Oct. 22, 2020–  According to recent data released by the Office of the Director of Health Services, the majority of COVID-19 infections are being found in young adults between the ages of 20-34.

A statistical breakdown of COVID-19 infections based on age and sex was released on October 20 and showed that over 1,149 COVID-19 infections had been found in persons between the ages of 20 and 34 years. Of those 1,149 young persons, 506 are females and 643 are males.

The release noted, however, that “While the highest number of cases have been in those 25-29 years of age, mortality has been primarily in the older age groups.”

The release stated, “COVID-19 has a higher mortality in older age groups and when linked to co-morbidities such as hypertension, obesity, and diabetes, but NO age group is exempted.”

Two new deaths were recorded since our last update. The death of a man, a Trial Farm resident in his 30’s, was reported. He is reported to have been found at home, gasping for breath, and was transported to the Northern Regional Hospital, where he died on arrival.
Another man, in his 80’s, died at the Northern Regional Hospital recently. He was first admitted to the hospital earlier this month, but later passed away. The fatality rate in the country currently stands at 1.57%. 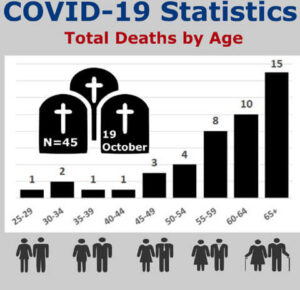 A further update released on October 21 revealed that a total of 2,937 COVID-19 cases have been confirmed in the country so far. Of these, 1,135 remain active, 1,756 infected persons have recovered, and 46 persons have died.

The last report on hospitalizations published by the Office of the Director of Health Services indicated that 6 patients (5 males and 1 female) were admitted to the Karl Heusner Memorial Hospital’s ICU; and one person, referred from the Northern Regional Hospital (NRH), was intubated. Three of these persons are hemodialysis patients. There are also 4 patients (all males) admitted at the Northern Regional Hospital. Three of these are confirmed cases, and the other is a highly suspect case.