ORANGE WALK, Belize, Wed. July 21, 2021– This week, Minister of Health, Hon. Michel Chebat along with a team of health personnel, went to the Orange Walk District to carry out vaccinations at the People’s Stadium in Orange Walk Town and the Central Park in San Pablo. Throughout the day several photos were posted to social media showing winding lines of persons in cue waiting to be vaccinated. It’s been estimated that hundreds of residents from Orange Walk Town, San Pablo, and even San Jose were present to receive either their first or second dose of the vaccine. “This is what we were hoping for. This is what the ministry has been working on for the last six months … this crowd out here today shows to me that people are listening, people are getting the message, people realize the importance of being vaccinated,” remarked Minister Chebat while he was in San Pablo.

However, Minister Chebat also noted, “We have over three hundred active cases at this time. There is no need for that. We moved from a level one to level three.” In fact, Minister Chebat confirmed one of the country’s greatest fears— that we are in the “preliminary stages” of a third wave of COVID. This means additional preventative measures will be instituted, including the recently announced extension of the curfew, which will now start at 9:00 o’clock each night rather than 10:00,.and will end each morning at 4:00 o’clock. That curfew period will go into effect every day of the week, even on Thursdays, Fridays and Saturdays — days on which there previously was a shorter curfew period (from 11:00 p.m. to 5:00 a.m.). Hon. Chebat additionally stated that the recent spikes in the number of COVID-19 cases have been attributed mainly to large church services across Belize, at which COVID-19 protocols have not been adhered to, and as a result there will be restrictions placed on religious services and a possible closing of churches in areas where there are an increasing number of cases, he said. 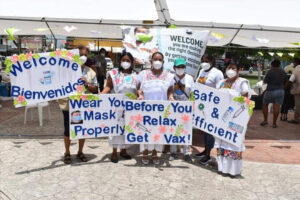 He explained to local reporters, “As of Monday, curfew will begin across the country from 9 o’clock and it’s gonna go on til 4 o’clock in the morning. So that’s an additional measure we’re putting into place. Also, throughout the country we’re looking at the villages, where we have increasing numbers. And a lot of the index cases are arising from places of worship. We have asked before; we’ve asked the churches to please control the numbers; to please make sure that their members are observing the public health measures. It has not been happening. And so, as of Monday, we will be closing down those places of worship in these villages where we have expanding numbers.”

Chebat also announced that there is a possibility of additional villages being placed on lockdown based on the results of analysis of data collected from those areas. That analysis is taking place at the moment, he said. Notably, the Minister did make mention that there will eventually be a “benefit system,” through which vaccinated residents will have access to certain privileges that unvaccinated residents will not be able to enjoy.

Facebook
Twitter
Pinterest
WhatsApp
Print
Previous articleMuch Ado About The 11th Amendment Pt. 1
Next articleWhy Justin Williams is the most important bike racer in the world