Cracking the case of the missing ammo 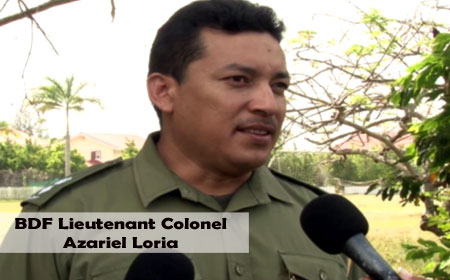 PRICE BARRACKS, LADYVILLE, Wed. Apr. 22, 2015–The investigation into the embarrassing recent theft of over 2,500 live rounds of high-powered ammunition from the Belize Defence Force (BDF) may be one step closer to unraveling the circumstances behind the heist, an army spokesperson said today.

The $10,000 worth of ammunition, which belonged to the military’s US counterparts, went missing during a 3-week period sometime between December 7, 2014 and January 23, 2015, when a routine security check uncovered a breach at one of the holding bays at the property which is used to store ammunition and explosives at the BDF’s Echelon Compound in Ladyville.

Today, almost three months later, BDF Lieutenant Colonel Azariel Loria told reporters that there has been a breakthrough in the ongoing investigation.

He said, “What we discovered at the bay in question at the Echelon compound was that there was a handprint on one of the zinc fences, so police investigators took note of that handprint, and they are following it up.”

He went on to explain, “An internal and external investigation occurred. The BDF interviewed the persons that were working at the time [of the theft] at the Echelon compound. Also, the police were invited to come and do their investigations, so it’s a two-prong approach.”

“Internally now, investigations have revealed that the theft could have happened much earlier than it was discovered, like a month before. During that period of time, there were approximately three to four rotations/shifts that worked, hence the reason that 30-35 persons have been interviewed.”

“[Nevertheless], we are still working on it. It’s a very difficult case to crack, but we’re waiting on police forensics [personnel] to come and give us their findings in regards to that handprint”, he further stated.

Loria also detailed measures that the BDF and their US counterparts are taking to ensure that such an incident – the fourth in a series of burglaries that have taken place at the army base in the past 11 years –does not repeat itself.

“The United States, through their military liaison office, stores the ammunition in our compound because they don’t have anywhere else in the country to store it. They come to Belize to impart training to our security forces, so they bring in ammunition that is used for training purposes only. Apparently, some of the standard operating procedures in the Echelon compound were breached. As a result, we are trying to rectify with the military liaison office from the US and come to an agreement to find other means and ways to store their ammo”, he mentioned.

In late January of this year, Eber Navarette, 39, a BDF sergeant attached to the Price Barracks Compound in Ladyville, was remanded to prison for an unlicensed 9 millimeter pistol that was found in his possession.

Navarette was reportedly one of the persons assigned to guard the Echelon store when the bullets disappeared; however, he has not yet been implicated in connection with the scandalous burglary.

The ammunition, which is used for M4 and M16 assault rifles, is believed to have ended up in the hands of criminal elements who, in turn, took them across the western border for sale on the black market.