Craziness in the city —7 murders in 5 days 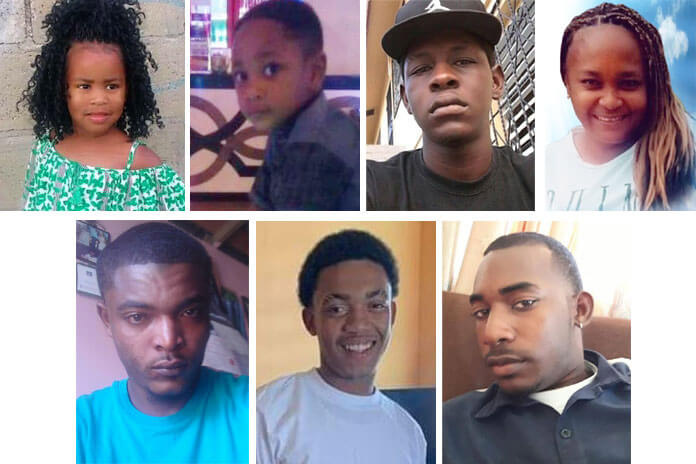 Two 5-year-old children killed within 48 hours of each other.

BELIZE CITY, Tues. Mar. 17, 2020– A spate of shootings has left 7 persons dead, including a little girl and a little boy, both 5 years old, who died while sleeping in their homes with their mothers. The two children were killed within 48 hours of each other in separate shooting incidents.

In one of the shootings, a 2-year-old girl was also grazed.

The latest murder occurred at about 3:30 this Tuesday afternoon, at the corner of West Street and Cemetery Road. Bowen and Bowen Ltd. employees Derrick King, 23, and Haywood Brown 20, were making deliveries and were parked at the corner of the two streets when two men in the area fired at rival gang members in reckless disregard for the lives of people in the very busy area.

The four persons were taken to the Karl Heusner Memorial Hospital, where King was declared dead on arrival, while Brown and the other two passers-by were admitted in a stable condition.

A quick investigation led to a suspect, who was detained.

The murder rampage began at about 11:00 Friday night in the lower flat of the two-flat house of Fredrick Williams and his family on Partridge Street Extension. Fredrick Williams, 18, who had just been released from police custody, was watching television and playing games with his two younger brothers in his family’s house when a gunman kicked in the door and fired at Williams multiple times, then escaped.

Williams was shot in the chest and abdomen, and died just before doctors at the Karl Heusner Memorial Hospital were about to operate on him. His two younger brothers were not hit.

Police believe that the brazen murder was a result of gang rivalries in the area. Williams was reportedly affiliated with an opposing gang. No one has been arrested so far for the murder.

Then, at about 9:00 Sunday night, 5-year-old Dominique Rhamdas was fatally shot while sleeping at his home on 6th Street. His mother, Shakira White, 31, and his stepfather, Philip Leslie, 27, were also shot. Leslie died on the scene, while White died on arrival at the KHMH, and her son, Dominique, died just hours later.

Dominique’s sister, two years old, was grazed on the knee. She is in a stable condition at the KHMH.

The murderer or murderers had sprayed their house with bullets from outside, and today, Tuesday, police announced that a suspect had been detained.

Then at about 9 o’clock Monday night, just over 24 hours after the three murders on 6th Street, Collett Morter, Jr., 19, of the Gungulung area in Lake Independence (Lake I), was at a house on Gladden Street, also in the Gungulung area, watching television with his friends when a man came to the house and called him.

When Morter came out of the house to see what the man wanted, the man shot him in the chest, and ran. Morter died almost immediately.

A neighbor told us that he heard the gunshot and saw a boy running into the back area of the Gungulung.

In speaking to the media, Doreen Balthazar, Collett Morter’s mother, said that she is not sure if he was affiliated with gangs, because he was friendly and made friends with anyone. She believes that it was the environment in the area, because there are ongoing rivalries and acts of retaliation between opposing groups of young men.

Balthazar said that she has five more children and she must be strong for them. She is fearful, however, that she will not get justice for her son, because senseless violence is on the rise, and there is fear and silence among people, which is making criminals bolder. She will leave things in the hands of God, she said.

At about 1:30 this Tuesday morning, about 4 hours after Morter’s murder, Kia Herbert, 5, a student of Unity Presbyterian School, Belize City, was sleeping in her family’s house with her mother, Frances Herbert, 27, a domestic of Pitter Street in the Collet Division, when a gunman went up to the plycem house and fired into their bedroom from a distance of about three feet. No gunshot residue was noted on the bullet holes in the plycem wall, which indicated that the shots were fired from no more than 3 feet away.

After the killer fired into the bedroom, he ran out of the yard. As a result, Kia Herbert’s mother, Frances Herbert, was shot in the shoulder and Kia was shot in the abdomen, back and leg.

The mother and daughter were rushed to the Karl Heusner Memorial Hospital, where Frances was admitted in a stable condition, while Kia was declared dead on arrival.

Kia’s grandmother, Desiree Herbert, who was also sleeping in her bedroom in the house, said that they were awakened by the gunshots, and when her daughter, Frances, realized that Kia had been shot and was bleeding, she called for an ambulance and they were both taken to the hospital.

She is clueless as to why anyone would want to kill her daughter and granddaughter. So far, no one has been arrested for the shooting.

The devastated grandmother told the media that sometime yesterday, a man who was armed with a gun chased her grandson into the yard, but she does not know the man. It was the first time that she saw him, and she would not be able to recognize him if she saw him again.

Luckily, her grandson got away, but they became cautious and did not sleep on the bed and slept instead on a mattress on the floor, fearing that the gunman would return.

She surmised that the gunman peeped into the house and saw where her daughter and granddaughter were sleeping, and fired just above the floor.

A neighbor of the family who requested not to be identified told us that on Monday night, she arrived home from work at about 11:00 p.m., and got into bed at about 1:00 a.m. Shortly after, she was alarmed by gunshots being fired in the area, and she heard screaming.

She learned that Kia and her mother had been shot, and that Kia was dead. She became very sad, she said, because she loved the little girl and treated her as if she was her own. She said that she has been living in the area for about 4 months, and that there are persons who come from through the cemetery into their area to do mischief or to smoke drugs.

She said that the area is dark and she is urging the authorities to put lampposts in the area, and also a camera, which she believes will lessen the criminal activities.

Seven hours later, at about 8:30 that Tuesday morning, two men were shot while sitting inside a yard on Jane Usher Boulevard. Mario Castillo, 77, was sitting in a chair when he heard gunshots, and his friend, Aaron Brown, 48, a construction worker of Jane Usher Boulevard who was also in the yard, told him to run, because a gunman was firing at them from some nearby bushes.

When they rushed into the house, however, they realized that they had been shot. Castillo was wounded near his ankle, and Brown was wounded in the buttocks. Castillo has since been treated and released from the KHMH, while Brown remains hospitalized.

It is not known why the men were targeted, but police believe that they were the casualty of ongoing retaliation and rivalries between the rival groups in the area.

There is public outrage because of the senseless killings, especially the deaths of the two children, who were sleeping with their mothers in their bedrooms, and are calling on Government to enact drastic measures to curb the unacceptable, escalating violence.

In response, government has put soldiers on the streets with police in an effort to address the out-of-control crime.