Cricket Corner – Satish, Man of the Game for Berlan 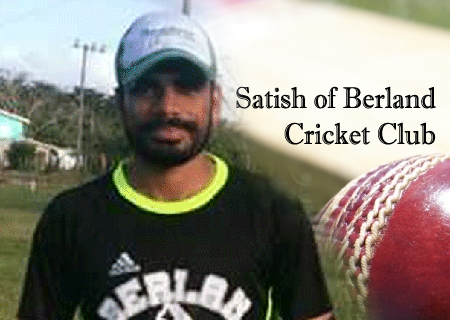 BELIZE CITY, Thurs. Feb. 16, 2017–Hello, cricket players and fans! Under the auspices of the Belize National Cricket Association, the 2017 Harrison Parks Cricket Competition got underway with some very exciting games. Thanks to our kind sponsor of this year’s season, Bowen and Bowen!
Lemonal

Let’s first go to Lemonal, where three-time champ Easy Does It played against newly formed Summer Fever of Bermudian Landing.  Newly formed, but the team is comprised of players that were from Berlan Cricket Club, but went under new management. Easy Does It took to bat first, and at the fall of the last wicket, the team put on the scoreboard a very impressive number of runs, 189. Last year’s MVP, Andrew Banner top scored with 55 runs, while the manager of Summer Fever, Conway Young took 4 wickets.

When it was time for Summer Fever to try and best the score, they did fight, but no player was good enough to help Conway Young, who top scored with 54 runs. Summer Fever fell short, only reaching 135 runs. However, that score was very good, realizing it’s the champs they were dealing with. In that inning, captain Kenroy Reynolds took 5 wickets.
Isabella

Now, we go to Isabella, where their team, Uprising went up against visitor Wicked Eleven of Flowers Bank. A big battle did go on, as the Wicked 11 team damaged them with a score of 113 to 71. For Wicked 11, Randy Rhaburn top scored with 54 runs, while Norman Revers took 5 of Wicked 11 wickets. For uprising, Justin Revers scored 16 runs, while Walter Flowers of Wicked 11 took 6 wickets.
Sandhill

Well, at Sandhill, home team Bright Star, under new management too, was no match for big, bad Excellence, who whipped them, 276 to 41. In that inning for Excellence, Berman Stephenson scored 45 runs, and Orson Flowers took 6 wickets.  For Bright Star, Arun scored 7 runs and took 4 wickets.
Crooked Tree

On Sunday in Bermudian Landing, Berlan hosted Sunrise. Berlan team is a combination of natives of Landing and India, some of whom are student doctors. A few Indians on the team are naturalized Belizeans. One such fellow is Satish, a former player of Sunrise. More on him later.

The game did not start at the usual time of 10:30 a.m., as the pitch was a bit wet due to a light rain in the morning. Toss was spun, and Sunrise won the right to decide whether to bat first or let the opponent bat. The captain, after consulting with his teammates, gave Berlan the right to bat.

Let me say that I have played cricket for many years, and have good knowledge of the game. When a pitch is not dry, batsmen have the advantage over any bowler, as the ball tends to slow down. So, the bowler has difficulty in controlling the ball in a way he wants to. But of late, these players/bowlers have a different mind towards their performance.

At 11:45 a.m., Berlan took to bat. Things were not going well, as some of the batsmen were out Leg Before Wickets (LBW). This apparently did not sit well with Berlan’s managers/players. Batsmen have a practice of stepping in front of the stumps in order to have good control of the ball. The ball could, and will beat you. (I had the honor of officiating the game.) At the fall of the last wicket, the score was 162. That, to me, was an extremely good score. In that inning for Berlan, Prasat top scored with 54 runs, while veteran Edison Parks took 3 of Berlan wickets.

After a short lunch break, it was time for Sunrise to take up the bat. Now, the pitch was completely dry. Satish, as aforementioned, took the ball. At the onset, he started to display excellent performance. With his speed and accuracy, Sunrise started to lose batsmen fast. Every over he bowled, he got one or two batsmen out. At the fall of the last wicket, Sunrise could only muster 62 runs. In 8.5 overs, Satish took 7 wickets, losing only 23 runs. That, to me, was impressive. On several occasions, I could see Shane Young, the official captain, telling him to come off the ball. I heard him say, “Please leave this to me.” He had proven himself well. Conway Jones scored 29 runs.

That ended this week’s games. Congrats to winners! Better luck next time for who did not win! To all, continue to respect yourselves and your fellow men.
Upcoming weekend

The following games are scheduled for this weekend:

On Saturday, Western Eagles vs Excellence at Double Head; Easy Does It vs Bright Star at Lemonal; (Summer Fever rests); Wicked 11 vs Suga Boys at Flowers Bank; Sunrise vs Uprising at Lords Bank.

And on Sunday, Brilliant vs Berlan at Crooked Tree.