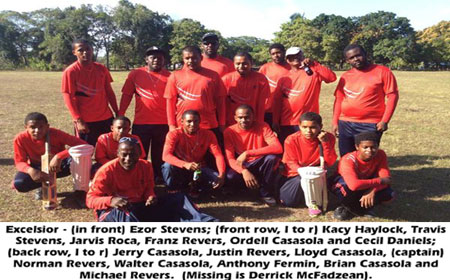 BELIZE CITY, Mon. Mar. 9, 2015–The Harrison Parks National Cricket Competition 2015, under the auspices of the Belize National Cricket Association, continued over the weekend with only four games played. To say the least, three of them were very exciting, where I believed some tears fell.

Now, to my knowledge, Eagles have always had a hard time chasing scores, no matter how small. (Remember, this is my opinion.) I must mention that when the last two batsmen went in, the score was at a mere 53 runs. Kirk Banner and Brandon Lewis were the last two batsmen for Police, and they pushed the score to 88.

With that said, in Zone One, two teams are tied at 3 and 1 – Western Eagles and Police. The game between Easy Does It and Excellence was not played due to the Ruta Maya Race. That game will be played on Sunday, March 15 (hopefully).

Before I forget, I was asked who introduced cricket to Rancho Dolores. And with pride I said, it was the Youngs. My father, John Young was the first captain of the team named Brave Western. The first game was played at Flowers Garden, the home of my grandfather and father, and my uncles. The name Western Eagles was given by principal teacher Hubert Cacho, I believe, in the sixties. The games were taken to St. Paul’s by Marcelo Casasola, to Double Head by Percy “Faco” Flowers. Another very respectable man, Percy Flowers also took the game to Crooked Tree.

It’s a long journey how the game was introduced then, and where it is at present. Another time for me to tell you more. Earl “Bob Rancho” Perez has helped me in getting those stats as best to enlighten fans about the history of cricket so far. I will in no uncertain terms say, Thanks, friend.

Let’s continue with the weekend games. In Zone Two, Isabella Uprising traveled to Carmelita to play Suga Boys, who had lost all three games. Meanwhile, Uprising was 3 and 0. But the Sweet boys put a licking on them, 96 to 95 with 2 spare wickets. Winston Hendy top scored for Uprising with 35 runs and also took 5 wickets. For Suga Boys, Michael Wade top scored with 41 runs, and C. Tillett took 4 wickets.

Then, moving to St. Paul’s, Bright Star, who was winless, went to play Excelsior, who was also winless. Excelsior came out of the shadows and made their fans proud by winning over Bright Star, 84 to 81 with 7 wickets to spare. For Bright Star, Shane Robinson scored 20 runs and took 2 wickets. For Excelsior, Lindon Casasola scored 31 runs, while Anthony Fermin took 6 wickets.

The other game was at Lords Bank, where Sunrise did a good showing by belting Berlan of Bermudian Landing with a score of 92 to 41. For Sunrise, Michael Sobers scored 31, and Cornel Brown took 4 wickets. For Berlan, Jerry Banner scored 15 runs, and C.J. Pook took 3 wickets.

The games set for this Saturday, March 14, are as follows:

Have a wonderful weekend, cricket fans. Before closing, I must congratulate the umpire, Isson Charles for a job well done. Keep up the spirit of cricket!