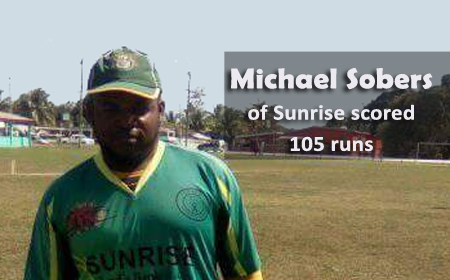 BELIZE CITY, Thurs. Mar. 2, 2017–Hello, readers, players, supporters and fans! Under the auspices of the Belize National Cricket Association, the 2017 Harrison Parks Competition continues. Thanks to the sponsors of this year’s cricket season, Bowen and Bowen.

Before getting into the games, our heartfelt condolences go out to the Lanza family and Uprising Cricket Team of Isabella on the passing of their loved one, Mr. Joseph “Joe” Lanza. May his soul rest in peace.

Again, this weekend, followers of cricket saw some very excellent matches. One was too close for comfort; one saw the first century scored; and one is yet to be decided.

Western Eagles took care of Easy Does It in a very close and well-played game. Both teams, I could tell, had worked on a strategy to win. At the fall of the last wicket a little after 6:00 p.m., Western Eagles came out victorious. This was a hard-fought game. The victory is well earned. Everyone who has seen these two teams play against each other knows it was always a good game, whoever wins.

That’s a very impressive score. But, as what I always say, your score might look large but if your bowling is not too good, the score could be beaten.

At Flowers Bank, Wicked Eleven was no match for Brilliant, who bowled the team down for a mere 70 runs. It took Team Brilliant only 5 wickets to surpass Wicked 11’s score. For Wicked 11, Walter Flowers and Vince Robinson scored 9 runs each, while Edison Robinson took 2 wickets. For Brilliant, Brandon Lewis scored 25, and Clifton Tillett took 4 wickets.

Now at Carmelita, Sunrise did a damage to home team Suga Boys, not only beating them badly, but allowed Sunrise’ most disciplined player without a doubt to score 105 runs, making him the first to score a century plus this season. That person is no other than Michael Sobers, a long-standing player of Sunrise Cricket Club. Congratulations to you, sir! You have done well. The game ended this way: Sunrise 268; Michael Sobers 105; Conway Jones took 5 wickets. For Suga Boys, Elroy Anthony scored 26, and Perandi took 4 wickets. A message to Team Suga Boys: Don’t let this defeat discourage you all. This is the way cricket is played. Some days, all seems well; other times, all seems so bad. It does not matter what runs you lose by. Just get up, brush your pants, and get ready for the next day.

Now at Isabella, what a game played between home team Uprising and Berlan, two evenly matched teams! Uprising went to bat first. At the fall of the last wicket, the team scored 193 runs, with Norman Rivers scoring 46 and taking 6 wickets. Very impressive, sir!

Berlan went to bat after lunch break, and this is the way it went: Leonel Russell scored 62, and Prashant took 7 wickets. The last batsmen were in, but the game had to be stopped when the umpire sighted that it was getting dark, and to avoid injuries, he did just that. The continuation will be held on a date to be announced.

Due to the La Ruta Maya events, no games will be played this weekend. So, till next time, respect your fellow men.