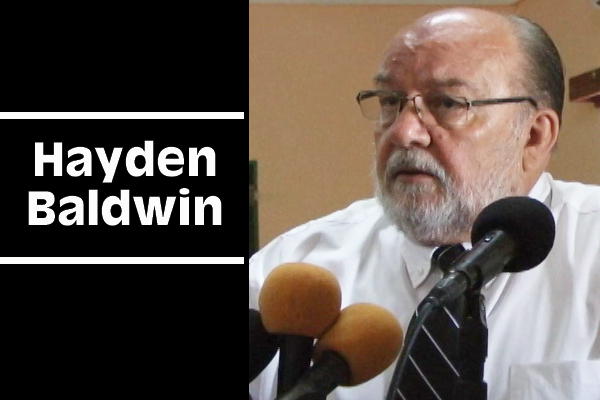 Those who fail the course risk being booted from the unit

All the country’s crime scene technicians are currently participating in what is slated to be an intense one-year training course in forensic crime scene investigation in order to sharpen their ability to guarantee convictions in criminal cases, which will hopefully curb what has been considered a dismal conviction rate compounded by spiraling incidences of violent crimes.

The course is being taught by Hayden Baldwin, a top notch advisor and crime scene investigator from the United States (US) who presently acts as the Executive Director of the International Crime Scene Investigators Association, and who has himself received training by the Federal Bureau of Investigations (FBI) and Crime Scene International.

Today, in speaking about the initiative, he told us that the objective of the training – which is being facilitated by the US Embassy – is to bring Belize’s scenes of crime technicians up to par with international standards, particularly those employed by American police departments.

He stated, “Scenes of crime technicians are going to receive a level of training above what they currently have and that level will take them to international standards. In order to accomplish that, it will take about one year of training. I will be here for 2 weeks each month for the next year to go through a very intense and long training that is going to challenge them to make sure that they are the forensic experts that they will become. We will be looking at photography; latent work, meaning fingerprints; palm prints; shoe impressions; then going into impression evidence, which is shoe prints, tire tracks, bite marks, tool marks; then into biological and trace evidence, where they’ll be able to use forensic light sources to look for bodily fluid at the crime scenes, trace evidence that can be recovered and taken to the forensic laboratory for analysis; and then into changing the way that they write their reports, make crime scene sketches and the reading of the crime scene; also part of that is the interpretation of the crime scene.”

According to the trainer, the technicians will be taught to use high quality tools which they do not currently possess, but which will hopefully be purchased in the near future so that their work will be done more effectively and efficiently.

Baldwin was in the country three months ago to do an assessment of the level of work of the crime scene technicians in Belize, and today, he noted that notwithstanding their various limitations, the work of our National Forensics Science Services is still commendable.

“I think they do their job currently very well with what they have to work with. They are limited by equipment; they are limited by supplies; [and] they are very limited by transportation to the scenes. So, there is a definite limitation that they currently have that would have to be resolved in order for them to go to the next level”, he said.

The entire personnel of the local forensics service will be required to participate in the course – at intervals -going up to April 2015, and the Director of the National Forensic Science Service of Belize (NFSS), former Commissioner of Police David Henderson, Sr., emphasized that since the goal is for the trainees to become crime scene investigators rather than just crime scene technicians, they “are expected to pass [and] anybody that fails will not be able to be a part of the [Forensic Science Service] team.”

According to Henderson, the Ministry of National Security has committed to purchasing and sourcing the necessary equipment needed by the National Forensics Science Service, while the NFSS employees will be rotated in three shifts for three days’ training at a time.

In 1998, Baldwin retired as a Master Sergeant from the Illinois State Police, and has been working as a Supervisor and Head of Crime Scene for 11 years.

His law enforcement career, however, reportedly started 44 years ago and he has spent 20 years in the forensic field.

Baldwin has been the owner of a forensic consultant business for the past 6 years, and has also been working as a forensic advisor for Jamaica.

In Belize, several cases have been thrown out of court in the recent past and accused perpetrators keep walking free due to insufficient evidence, which leaves many families believing that justice was not served, either because terrified witnesses refused to talk, or due to procedural errors such as lack of proper evidence-gathering and/or faulty recording of statements.