Cruise port exclusivity in Belize – a thing of the past 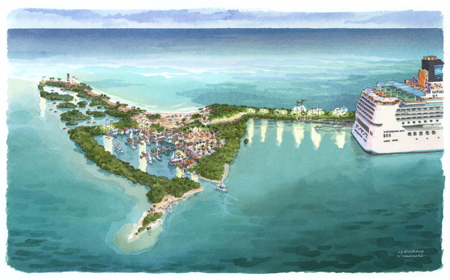 BELIZE CITY, Wed. Jan. 27, 2016–Currently, there is only one port for cruise tourists in Belize – that is the Belize City port operated by the Belize Tourism Village, but a second port is due to be added in southern Belize, possibly in late 2016 or 2017, by Norwegian Cruise Lines at Harvest Caye. What seems clear is that the era of exclusive deals for Belize’s cruise sector has come to an end after Supreme Court Justice Courtney Abel ruled decisively on the matter last October.

Abel had ruled against the exclusive arrangement between the Fort Street Tourism Village (FSTV) and the Government of Belize in a challenge lodged by Michael Feinstein, an original partner in the tourism port who has since developed a model for a cruise port at Stake Bank, offshore Belize City.

Even though the court has struck down the exclusivity clauses, Feinstein recently backed down from his plans after reports that the Government is pursuing talks with the Ashcroft group for another cruise port in the Belize City area – a resurrection of an old idea to build a cruise port at Port of Belize.

In a press release issued earlier this month, the Government said that Feinstein had requested a 25-year exclusivity license – one that Cabinet said could not be given, citing the Abel ruling on the matter. The Government’s statement on the matter admitted that “the Court ruled that those four provisions on exclusivity in the [FSTV] agreement were unlawful.”

“There is now a judgment of the Supreme Court striking down exclusivity. What it means, apart from the implications for Norwegian Cruise Lines, is that when the Stake Bank developer comes to government and says ‘I want a 25-year exclusive for my Stake Bank project’, just after he succeeded in getting a judgment from the Supreme Court saying exclusives must go out the window. Of course, government can’t countenance that. When we did give an exclusive, it was before the ruling of the Supreme Court,” Prime Minister Dean Barrow, United Democratic Party member for Queen’s Square, said.

Espat, who Barrow said had initially supported the Harvest Caye venture, also pointed to Government’s plans to consider a new port in the Belize City area, and asked, in the context of extended litigation wars between the Barrow administration and Ashcroft, “what kind of game is going on here with the government and Michael Ashcroft?”

Espat went on to cite a study which he said had already indicated that the Port of Belize site is not feasible; however, Barrow said that this was not the case.

Government has said that “…it is reviewing numerous studies that have been done over the past two decades which identify the Port of Belize as a viable facility.”

A development at Port of Belize would bring on-stream the third cruise port in Belize, and Feinstein has told us that he won’t venture on with Stake Bank without a guarantee from the Government to secure his investment.

Last year, the Government had approved a development concession, with tax holidays, for Stake Bank, supported by both the ruling party and the Opposition – but there was no talk of an exclusivity arrangement in the 20-year concession. Feinstein said that the Prime Minister has not signed the legislation to bring the Stake Bank concession into operation.

In Parliament on Friday, Espat said that the perks being given to the wealthy international cruise line, Norwegian, are not being afforded to regular Belizeans.

“Why is it we cannot treat our Belizean people the same? We should be encouraging our Belizean people to get into business. But yet, we give all the privileges to these people who come from outside. What will the people in the south gain from all this?” Espat questioned.

“You talk about making sure we give advantage to Belizeans? No greater advantage could have been given to a Belizean than was given by your government to your brother [Luke Espat]. With respect to the Port Loyola cruise port…as usual, he cocked up and chased Carnival away,” Barrow said.

With a champagne party onsite, ground was broken for the cruise port at Port of Belize over a decade ago, in 2004, but the project never came into fruition. It was fiercely challenged by Feinstein and the FSTV, but the then Musa administration settled by granting further concessions to the FSTV through an amended agreement for further allocations from the head tax.

Since then, Feinstein parted ways with the FSTV and proposed a new port at Stake Bank. Government gave its nod to Feinstein amid a lawsuit from Luke Espat back in 2007, but neither of the new Belize City cruise ports has gotten off the ground.

When it issued its statement earlier this month, the Government announced that it had recently received expressions of interest to develop the Port of Belize from two companies: Ports Investment Limited (PIL), the company that currently controls the receivership, and Hertzog International Incorporated.

“The Government remains open to the idea of reviewing the feasibility of developing the Port of Belize as a viable option,” the release had said.

Facebook
Twitter
Pinterest
WhatsApp
Print
Previous articleCaribbean fights to shield its US$29 bn tourism industry from Zika
Next articleHon. Cordel Hyde is the man our people want for PUP Leader