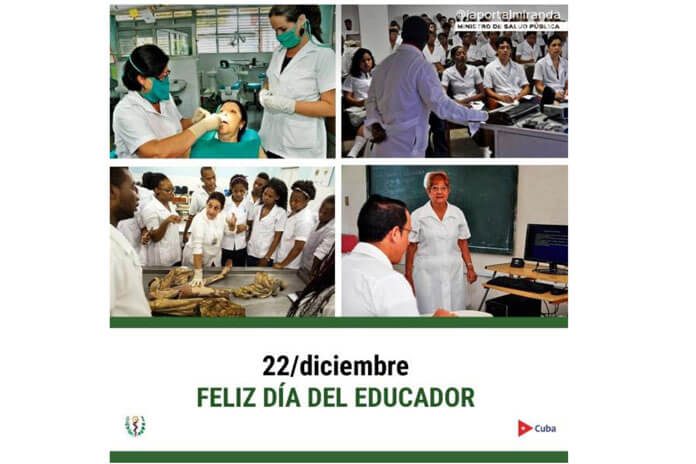 “Havana’s Latin American Medical School takes passionate young people from developing countries and sends them home as doctors. It’s all about driving health equity”, writes Gail Reed. Now the challenge is to get medical societies to accept them. Dr Midalys Castilla is animated as she talks about the graduates of Havana’s Latin American Medical School (ELAM) who are serving with Cuban medical teams in post-’quake Haiti. By the end of February, 557 of these ELAM graduates from 27 countries had made their way to Port-au-Prince, swelling the ranks of teams that will staff public health facilities past the emergency phase. “Doctors willing to go where they are most needed for as long as they are needed: this is the reason our school was established,” says Castilla, academic vice-rector and a founder of the institution that was created after another disaster hit the region over a decade ago.

In 1998, hundreds of Cuban doctors were dispatched to the Dominican Republic, Guatemala, Haiti, Honduras and Nicaragua after two devastating hurricanes. Their services in remote, underserved communities begged the question of what would happen when they returned home. This dilemma of sustainability prompted the decision to establish ELAM, its central campus located on Havana’s western shoreline. The first students from Central America arrived in February 1999 and graduated from the six-year curriculum in 2005. Since then, 7248 physicians from 45 countries have obtained ELAM degrees, with current enrolment being 9362 students from 100 countries mainly in the Americas, the Middle East, Africa, Asia and the Pacific Islands. In addition to its size, ELAM has other distinguishing features that align it with a handful of similar institutions worldwide founded expressly to address inequities in access to medical care.

Medical schools in countries such as Australia, the Bolivarian Republic of Venezuela, Canada, the Philippines and South Africa share “social accountability” as their premise. The World Health Organization defines social accountability of medical schools as “the obligation to direct their education, research and service of activities towards addressing the priority health concerns of the community, region and/or nation that they have a mandate to serve”. ELAM’s aim is to educate physicians primarily for public service in disadvantaged urban and rural communities, developing competencies in comprehensive primary care, from health promotion to treatment and rehabilitation. In exchange for a non-binding pledge to practise in underserved areas, students receive a full scholarship with a small monthly stipend, graduating debt-free. Student recruitment processes for ELAM vary from country to country, where school administrators may involve representatives from Cuban embassies, local civil society, grassroots organizations or government in the selection process. Candidates must have at least a high-school diploma, a good academic record, aptitude and pass the admissions exam. Numbers of applicants can be daunting: third-year student Javier Montero from southern Chile recalls that more than 600 people applied for 60 places the year he was admitted to ELAM. Preference is given to low-income applicants, who otherwise could not afford medical studies.

“The result is that 75% of our student body comes from the kinds of communities that need doctors, including a broad representation of ethnic minorities and indigenous peoples,” explains Castilla. For example, student Alfredo Cayul’s family is indigenous Mapuche and makes its living by subsistence farming in Chile; Jamaican Shereka Lewis’s mother is a secretary, her stepfather a carpenter; Keitumetse Joyce Let’sela’s widowed mother in Lesotho is a schoolteacher; and Vanessa Avila, from California, United States of America (USA), comes from a first-generation family of Mexican immigrants, her father being a gardener and her mother a housewife. After enrolment, students spend three to six months in a pre-medical bridging programme to address uneven educational backgrounds. Non-Spanish speakers study the language, since instruction is in Spanish.

The next two years focus on basic sciences, integrated in a new discipline called morphophysiology of the human body, including anatomy, physiology, embryology, histology and pathology. “This provides students with a more holistic understanding,” says Castilla. These science studies are integrated with early clinical contact with patients, essentially at community clinics, with the aim of creating greater relevance to real-life clinical practice. For the following three years, students are distributed among 14 medical universities across Cuba with some 32,000 Cuban medical students. There, clinical medicine – including patient relations – is melded with public health to build capacities for addressing health needs on a community as well as individual level.

These are the toughest years but also the most exciting, students say, because they are assigned patients under supervision as early as their third year. This is a significant departure from many curricula in Latin America, where even in the 1990s, a Pan American Health Organization study indicated that 70% of schools had no participation in their countries’ health services and only 17% used primary care as an academic setting. “We are learning medicine – I study at least five hours a day – and also about the human dimension of being a doctor from the example of our professors, and about the value of other health workers in the team,” says third-year student Javier Montero of Chile, when asked what was most important to him about his clinical experience. “We are bent on quality,” says Ovidio Rodríguez, professor of internal medicine at the Salvador Allende General Teaching Hospital, where 168 ELAM students rotate through third year. “We aren’t giving away grades. But we also work with students to help them succeed.”

The fourth clinical year may be spent in Cuba or, in some cases, in the interns’ home countries under the tutelage of Cuban medical professors. “This has the advantage of familiarizing interns with the health and social picture they will find when they graduate,” says Juan Carrizo, ELAM’s rector. “It also allows them to reconnect with their health system, communities and cultures.” Students who were interviewed commented on the bonds created by living and studying among peers from around the world. “The diversity that we thought would be our toughest problem has turned out to be our biggest strength,” reflects Castilla. One delegate per country is elected to the Student Council, which also schedules activities dedicated to each nation’s cultural heritage. Organizations such as the Student Movement of Native Peoples of the Americas (MEPOA) bring together the Aymara, Mapuche, Garifuna and other indigenous students, in what student leader Alfredo Cayul considers an important unifying experience. During summer vacations, many students are involved in community service projects at home, “keeping us connected and aware”, according to Pasha Jackson, a second-year student from Los Angeles, USA. A budding football star until sidelined by an injury, Pasha says memories of gang violence in his neighbourhood as well as his grandmother’s nursing career made him want to “make a difference through medicine”. He and 11 of the other 118 ELAM students from the USA spent last summer working with Native American tribal leaders and the University of New Mexico to understand conditions on the reservations and among the state’s rural communities. “We need to see how we can apply what some consider an idealistic education to our own country now, learning how people live and the health disparities we will have to face.”

His comments hint at the challenges confronted by innovative schools such as ELAM, which are struggling to be accepted by national medical societies and accreditation bodies. In the USA, 29 ELAM graduates are taking their licensing exams and another five have been accepted into residencies. The cost of taking such exams itself has been a problem for students in the USA and in other countries. But other graduates face bigger hurdles, as their degrees must be validated by sometimes reluctant medical societies and, even once they receive validation, there may be no jobs waiting for them in the public sector where they are most needed. “This is a big challenge,” says Castilla. “But where the medical societies are more conscious of the need for these young physicians and where governments have committed resources to them, we are making progress.” The new doctors are at work in most countries in the Americas, including the USA, various African countries and much of the English-speaking Caribbean region. ELAM, as well as the health systems around the world that incorporate its graduates, will ultimately be judged by its impact on the health status of the world’s poorest. The need is indisputable: the average physician-to-population ratio in the 47 countries represented in ELAM’s first graduating class of 1800 doctors was 0.98 physicians for every 1000 inhabitants, compared with Europe, which averages more than three per 1000 and Cuba at nearly six per 1000. And at the same time, schools like ELAM present their own challenge to medical education across the globe to adopt a more socially committed agenda. As Charles Boelen, former coordinator of the World Health Organization’s Human Resources for Health programme, comments: “This notion of social accountability (merits) attention worldwide, even within traditional medical circles ….The world urgently needs such committed builders of new paradigms of medical education.”

This week on December 22 at 7:37 AM, José Angel Portal Miranda posted on Facebook the following:

“When December 22 is celebrated on the day of the Educator in our country, in commemoration of the 58th anniversary of the Proclamation of Cuba as a Territory Free of Illiteracy, we recognize all those who contribute with their work to the training of today’s youth, who will be the relay of tomorrow. The results obtained in the health care of our people, and in many other nations of the world where Cuban medical collaboration is present, are largely due to the human capital formed by medical science educators. Congratulations to all of you, who are an example of humility and dedication, on behalf of the Board of Directors of the Ministry of Public Health of Cuba and of the Secretariat of the National Union of Health Workers #CubaPorLaSalud”

The challenge for Belizeans to conquer is equality – Clinton Canul Luna

WASHINGTON, United States, Tues. Mar. 17, 2020 (Caribbean360)-- The COVID-19 outbreak could have considerable implications for Caribbean citizens and their economies. The magnitude of this...
Read more
- Advertisment -