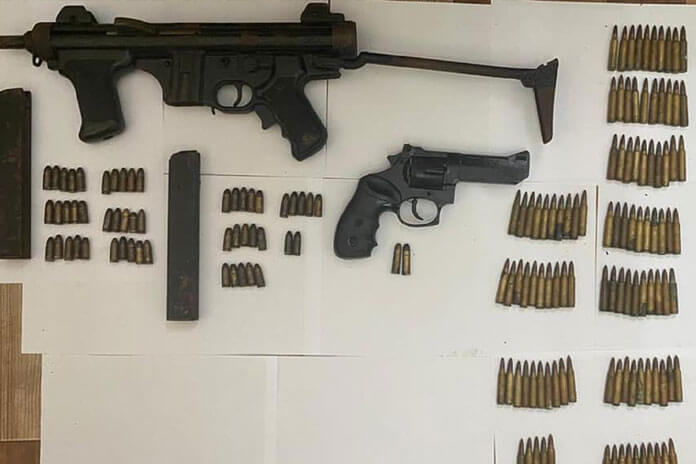 DANGRIGA, Stann Creek District, Sat. May 9, 2020– This morning, an operation was carried out in Dangriga to disarm gang members, and during that operation two combat-type firearms and a revolver, along with a large quantity of ammunition, were found in an abandoned house. At the time, no one was in the area.

One of the firearms which were found is an AK47 assault rifle that has a range of over 1,140 feet and can also be fired as a machine gun.

The second gun that was found is a 9mm submachine gun, which is used in close-quarter combat and house clearing, due to its short barrel.

The increased police presence and operations to disarm gang members were put into effect after 3 persons were wounded on April 29, when shots were fired at a house in the New Site area in which there were 10 persons, including 5 children.

Frederick Coote, 23, and Tamera Nunez, 21, who were inside the house, were hit by some of the bullets that were fired at the house, sometime around 8:00 p.m., just about the time when the curfew started. Coote was hit in the chest, while Nunez was hit in her thigh and Jaime Coote, Fredrick’s brother, was hit in the arm.

Another shooting incident took place in Dangriga just a few days later. At about 8:30 Sunday evening, May 3, Luwany Mena, 35, and his father, Ernest Mena, 62, of the Benguche area of Dangriga, were sitting on the verandah of their house when an unknown gunman, believed to be a gang member, fired at them for unknown reasons. As a result, Luwany was hit in his arm and his father was shot in the leg.

Commissioner of Police Chester Williams said that he is willing to declare a State of Emergency in Dangriga in order to round up the gang members and remand them, as was done a little over a month ago in Belize City.