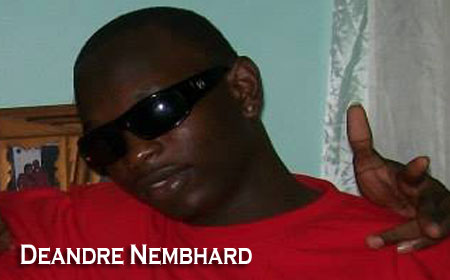 Deandre Nembhard, 17, was shot in the chest and body 6 times while socializing with his two friends in his family’s yard at about 2:30 Saturday morning by an unknown gunman who fired about 9 shots at him.

Although reports are that other people were in the yard, no one else was injured in the shooting.

Police who were on patrol in the area responded quickly and rushed Nembhard to the Karl Heusner Memorial Hospital, where despite the attempts of doctors to treat him, he died shortly after. He has since been taken to the morgue, where his body will undergo a mandatory post-mortem exam.

In a police press brief this morning held at the Racoon Street Police Station, ASP Alejandro Cowo, Director of Crimes Investigation in Belize City, told us that Nembhard and several friends were socializing in their yard when a car drove up and an unknown man came out of the car, unleashed a hail of bullets, then got back into the car and drove off.

Why the teenager was killed is not yet known. Nembhard’s uncle, Mario Ovado, said that at the time of the attack, he was at home, and if his nephew had done any wrong, a complaint could have been made to him, and he would have intervened, but no complaint was brought to him, so the families are at a loss for the reason he was murdered.

Ovado told us that the bullets damaged his vehicle — the vehicle radiator had been perforated and the vehicle’s body had also been damaged.

Police have begun an investigation into this latest senseless loss of life, but so far no one has yet been arrested.

Nembhard’s murder came at a time when ACP Chester Williams, Commander of Southside Belize City police, is making a huge effort to bring down the crime rate, and is conducting interventions among rival gangs to stop the senseless killing so that residents can have a sense of security in what has become a very dangerous city.

Williams told the media that there are established patrols in the area, but the size and dynamics of Lake Independence makes it difficult to police. To overcome this difficulty, the Commander said that he will be looking to see if he can get some additional resources for the policing of Lake Independence, although it will be very difficult.

Deandre’s father, Dean Nembhard, had previously told Amandala that he was always aware of the danger of living in the city and feared for his sons’ lives. He was contemplating moving out of the city to live with his family at a farm in Roaring Creek, where they could have lived in peace after his brother, Dennis “Colored” Nembhard, was shot and killed on Flamboyant Street in 2014. The death of his son is another blow to the grieving father.

Funeral arrangements are being made and the date will be announced after a post-mortem, which is scheduled for tomorrow, Tuesday.

Deandre is survived by his parents, Sherry Lee Ovado and Dean Nembhard, three brothers and two sisters. He is also survived by his grandparents and a host of uncles and aunts, including freelance reporter Anita Nembhard and Customs officer John Nembhard, among others.