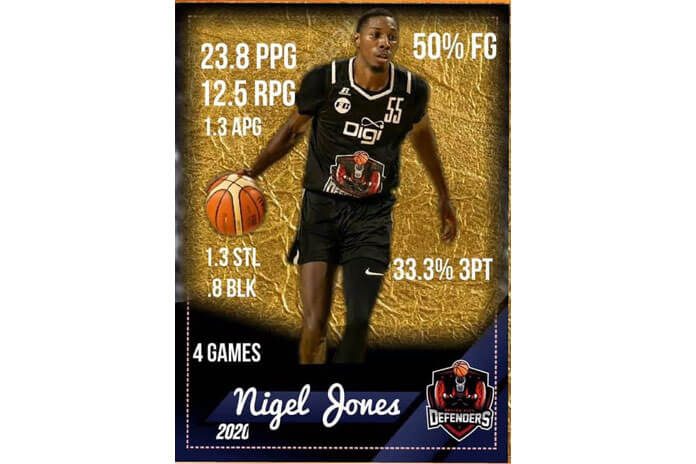 SAN IGNACIO TOWN, Cayo District, Sun. Feb. 9, 2020– The National Elite Basketball League (NEBL) hosted 4 games this weekend, as team standings are slowly stretching out to differentiate between the teams that are contenders and the few that are pretenders. All scores, standings, schedule and player stats can be found on our website at neblbelize.com. All games can also be followed live online on our webpage by clicking on the game at the top of the website. When fans click on the game, the live stats for that game will be accessible.

Verdes bounces back with win over Bandits

On Friday night, Verdes hosted Belmopan Bandits at the Sacred Heart College auditorium in a district rivalry that has been brewing for years. Verdes opened the game on a 15–0 run, and extended that lead to 42–21 at the half. Verdes maintained their lead for the entire game and, despite a late run by the Bandits, Verdes was able to secure the 67-57 victory in a low scoring affair. Verdes was led by last year’s MVP, Kris Frazier, who lodged a double-double with 21 points and the game high 18 rebounds; while Tyrone Hall had his best offensive output for this season with 13 pts and 5 rebs. Devin Thomas finished with 12 rebs and 7 pts. Khalil Jabbie from Belmopan Bandits was the top scorer in the game with 26 pts to go with 3 steals and 3 rebs, and he was the only player in double figures for his squad. Richard Smith III finished the night with 9 boards and 8 pts. Verdes is still plagued with turnovers, committing 27 turnovers this game, and averaging a whopping 26 turnovers per game in their first 3 games.

Digi Defenders claimed rights to the city on Friday

Riding a two-game winning streak, the Defenders entered week 4 hosting Benny’s Belize Hurricanes in a battle of the city rivals. Defenders jumped out to an early 25–10 first-quarter lead, while Hurricanes was slow out the gates for the second consecutive week with a sluggish start. At halftime, the lead was extended to 21 points, 54–33; but Hurricanes was able to cut into the lead by the end of third quarter, trailing by only 9 points. However, Defenders was able to secure their third consecutive victory, 83–67, to remain atop the standings at the end of week 4. Defenders was led by 2018 season MVP, Nigel Jones, who had the game-high in both points and rebounds, locking in another double-double with 22 pts and 16 rebs. Devin Daly exacted revenge on his old squad with 21 pts, 5 rebs and 4 dimes; while Mykiel Tzul tallied 15 pts and 7 assists; and Luther Page chipped in with 10 pts and 10 boards. Benny’s Belize Hurricanes’ top scorer was Jamell Harris with 19 pts and 10 rebs; while Alex Carcamo tallied 15 pts and 7 rebs. Darwin Carter finished with 10 pts.
Griga snaps losing streak, sending PG to 2 straight losses.

Griga Dream Ballers entered week 4 as the only team without a win, as they hosted their regional rivals, new and upcoming Punta Gorda Panthers. In a closely contested match, the home squad, Griga Dream Ballers was able to grab their first win of the season, 78–71, sending PG Panthers reeling to their second consecutive loss. Griga was led by Edgar Mitchell, who knotted a double-double with 19 pts and a game high 12 dimes; while Quinton Bowen scored 17 pts, and Delvon Henderson finished with 15 pts and 10 rebs. Punta Gorda Panthers was led by D’Von Campbell, who had the game high with 27 pts; while Jevonte Hughes was the only other player in double figures with 16 pts and 8 rebs.
Tiger Sharks defeated OW on the island.

On Saturday night, the defending champions, San Pedro Tiger Sharks hosted Orange Walk Running Rebels, where both teams were coming off huge wins last weekend. Orange Walk got off to a good start with a 3-point lead at the end of the first quarter; but by intermission, the home squad grabbed a 49–39 lead, which they were able to maintain to get their second consecutive victory, 91–75. San Pedro Tiger Sharks was led by Jihad Wright, who had the game high 25 pts to go with 10 rebs, 7 steals and 5 assists, with a whopping 40% efficiency rate. Antone Robinson, Jr. tallied 20 pts and 17 rebs, while Martevuius Adams finished with 20 pts and 10 boards. Francis Arana’s stat line included 11 pts, 5 assists and 5 rebs; while Kurt Burgess finished with 11 rebs. Roger Reneau was the high man for Orange Walk Running Rebels with 21 pts and 8 rebs, while Shaquille Stokes had his best game of the season with 19 pts and 5 steals. Dajuan Cooper finished with 15 pts.