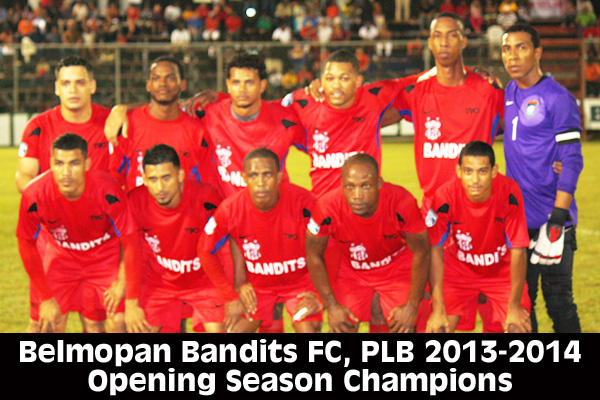 There is no better time to “play big” than in a championship game, and Belize’s CONCACAF hero Deon McCaulay proved that “there is only one #1” when he took the FFB Stadium by storm on Saturday night in the decisive Game 2 of the Premier League of Belize Belikin Cup Finals, blasting 4 of his team’s 5 goals, on their way to a whopping 5-1 victory over FC Belize for the championship.

According to Bandits’ statistician Allen “Johnny” Martinez, it had been all of 3 years since the Bandits had last beaten FC Belize, and few expected such a big score, after their 1-1 stalemate in Game 1 of the championship series last week at the MCC rounds in Belize City.

The Bandits had ended their regular season run with two scoreless draws against BDF and Verdes FC, and only entered the semifinal playoffs in the #3 seed position, ahead of #4 seed FC Belize. FC Belize promptly eliminated #1 seed Verdes in an eventful and somewhat controversial overtime win at the Marshalleck Stadium, where Verdes had not lost a match during the whole regular season; but there was nothing controversial about the way the Bandits disposed of #2 seed BDF, trouncing them 3-nil at the Isidoro Beaton Stadium, where Deon came to life with 2 goals, and ending it at the Carl Ramos with a 1-1 draw, where Deon was again on the scoreboard with his team’s only goal.

When the dust had settled after last Sunday’s 1-1 draw in Game 1 of the Finals at the MCC, Deon McCaulay had scored in his third consecutive playoff game (2 Semifinals and 1 Finals), and the stage was set for the decisive Finals Game 2 for the national championship against FC Belize at the FFB Stadium on Saturday night, February 8.

Known for their strong defence in years past, FC Belize had shown a slight crack in their defensive armour this season, giving up a surprising 4 goals to Verdes in a 4-1 loss at the Marshalleck in their second regular season meeting. FC Belize management were quick to point out that they had held the game to a 1-1 score for 75 minutes, though playing a man down after an early red card, before the last 3 goals came in quick succession. But this was followed by a 2-0 loss to Police United to end the regular season, and their playoff hopes seemed dim. However, “Lady Luck” smiled with FC Belize, and they made the playoffs in the #4 seed position.

Nevertheless, the FC tradition had been one of persistent lock-down on defence regardless of the circumstances, a posture that not all fans were happy with. But at least their die-hard fans could be assured that FC Belize was not a team to get “blown out” by any opponent.

After that event, it seemed that the FC Belize squad had gone back to their roots, and they were once again stingy with goals, going 0-0 with Verdes at the MCC, and allowing only 1 goal in their 2-1 win at Marshalleck in the semi’s. Then, in Game 1 of the Finals at the MCC, it was 1-1 against the Bandits. So, Game 2 of the Finals was supposed to be another low scoring nail-biter, possibly going to overtime.

When pressed for his strategy before the game this past Saturday night, Bandits new head coach since mid-season, former national team coach, Leroy Sherrier Lewis brushed the question aside, stating simply, “We just need to score goals. You can’t win without scoring goals.” And that follows from his background as a top national team striker in his playing days in Costa Rica. Most fans would consider Sherrier Lewis, like Marvin Ottley, when he controlled FC Belize, to be first committed to a strong defence, which is a standing rule in any professional football team; but in Deon McCaulay Sherrier had found a willing accomplice in pursuit of the most coveted object of a football game – goals.

Going into the Game 2 Finals match, Deon was a good pick for the playoff MVP honor, provided that his team won the championship; he had already tallied 4 goals, scoring in each previous playoff game. But on Saturday night, Deon took it to another level, blasting 4 goals in the Finals victory. Such a feat – 4 goals in a championship victory – had only been accomplished twice before, from our memory, thirty years ago (in 1984) by 2nd Division star Benjamin “Don’t” Mejia of Independence Milpros, and 1st Division star Arthur “Goatman” Leslie of Parra’s Milpros.

The Bandits took a 1-nil lead at the 37th minute after Deon received a centering pass from midfielder Denmark Casey and did what he does best; but the celebration was short-lived as the equalizer for FC Belize came two minutes later when a long free kick from the right side by FC Belize sweeper Leon “Chow” Cadle was diverted by a header from Michael “Suit” Hernandez in heavy traffic in front of the Bandits goal, and midfielder Mark “Kelo” Leslie charged forward on the left side to slam it past Woodrow West in goal from point blank range.

Both teams were involved in a tough, physical battle that involved a lot of man-to-man marking from FC Belize, prompting the Bandits forwards and midfielders to often switch position from one side of the field to the other to try and create confusion for the FC Belize defence and space for them to create an attack. An opportunity came just before the intermission, when Bandits midfielder Tyrone Pandy drove the left line and got all the way to near the FC Belize eighteen, drawing a defender out, before centering low across goal. The ball somehow slipped through to an open space on the right side, where an advancing Denmark Casey, Jr. met the ball just inside the eighteen and drove a hard right-foot blast past Glenford Chimilio in goal for FC Belize; 2-1 ball game at the 45th minute.

According to coach Fred Garcia’s half-time script for FC Belize, second half was supposed to be a hard fought re-bound to draw the score and then proceed to claim a late victory; but it was not to be. Calamity struck barely two minutes after the resumption, when defender Mark Grant committed a hard but unwise tackle from behind that prompted his ejection by referee Amir Castillas; and FC Belize was a man down for the rest of the game.

The physicality then got even more intense, and the Bandits got a scare less than 5 minutes later when a Jorge Estrada tackle resulted in McCaulay being helped off the field, favoring his left thigh or knee. Play resumed without McCaulay, but when he returned a couple minutes later, he was only in the game a minute when a corner from the left side by David Trapp resulted in a hand ball as FC Belize’s Stephen “Breds” Baizer tried to clear, and the ball got tangled in his midsection between his arm and his body. The referee indicated a penalty, and Deon placed a hard grounder to the right corner; 3-1 the score at around the 57th minute (officially 67’), and things were looking bleak for FC Belize. Four minutes later, it was a replay of their second goal, as this time the Bandits’ David Trapp drove the right side and sent the ball ahead to striker David Madrid, who lofted a high center to the far left side, where Deon pounced on the opening and slammed in his third goal of the evening at the 59th minute (officially 69’).

Trailing 4-1, FC Belize coaching staff decided to give their U-17 players a taste of prime time competition, and they inserted young midfielder Dmitri Fabro and striker Devaun Zuniga, replacing defender Jorge Estrada and striker “Suit” Hernandez. But before the youths could settle in, hardly 2 minutes later, there was Deon on a breakaway just past the half-way line after a high “contra golpe” from the Bandits defence saw Deon racing against FC Belize sweeper Leon “Chow” Cadle toward the FC Belize goal. With Chow in hot pursuit and FC Belize goalie Glen Chimilio alertly coming out, Deon lobbed the ball expertly over his head just hard enough to land under the crossbar – 5-1 ball game at the 66th minute (officially 71’).

After that, with the outcome already decided, FC Belize kept their composure and did mount a few attacks, including a very good swerving free kick to the top left corner by Jarret Davis that forced a diving save from West; but close misses don’t count, and the score remained 5-1 until the long whistle.

Following the game, individual awards (wood carved footballs) for the regular season were issued first, then the trophies (wood carved Belikin Cups) and cash prizes for both the sub-champion, FC Belize ($15,000.00), and champion, Belmopan Bandits ($30,000.00).