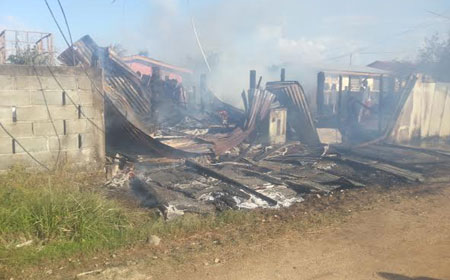 DANGRIGA, Mon. Mar. 2, 2015–Dale Lewis, 61, who was confined to a wheelchair, and who lived on the upper flat of his two-flat house on Isidoro Arana Street in the New Site area of Dangriga, was burned to death when his house was destroyed by fire at about 3:00 yesterday afternoon.

A witness told Amandala that when the house began to burn, people in the area rushed upstairs to rescue Lewis, but the door was locked from inside, and the stairs, which provided the only access to the elevated house, were on fire, which made it very difficult to get into the house to save him.

The witness reported hearing screams for help, but the intense heat of the burning lumber house forced them to retreat, and Lewis was burnt to death.

The Dangriga Fire Service told Amandala that they did not receive an emergency call, but at about 3:15 yesterday afternoon, a policeman drove to the fire station and told them that a house was on fire in the New Site area, and that someone was in the house, and they responded immediately.

A Fire Service supervisor reported that on their arrival at the scene, they saw that the top floor of the house had already been destroyed, and that it had collapsed. The walls of the lower floor were engulfed in flames, and the lower flat was also destroyed. He said that virtually the entire house had been ravaged by the flames by the time they arrived on the scene.

According to the supervisor, their investigation revealed that the fire began from the upper flat, where Dale Lewis lived, and that valuable time that could have led to the prompt outing of the fire was lost, because when the fire erupted, those who saw the fire called the police instead of the fire service.

He said that during their initial examination they did not find beading on the wires, and said that the cause of the fire is yet unknown.

According to police, Lewis’ wife, Thelma Lewis, 65, of Isidoro Street, told them that sometime about 1:00 yesterday afternoon, she left her house to do errands, leaving her husband, Alvin Dale Lewis Sr., 61, who has been disabled for the past 25 years, at home alone.