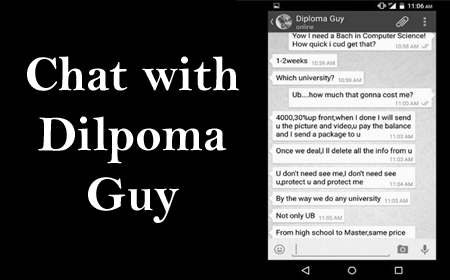 BELIZE CITY, Fri. Mar. 6, 2015–Authorities from the Ministry of Education, Youth and Sports today issued a press release in response to an online advertisement that has been circulated on social media for the past few days, promoting the sale of unauthenticated high school diplomas and tertiary level degrees for educational institutions in Belize, the USA and even Europe.

The advertisement features a dealer that refers to himself as “Diploma Guy,” who claims to engage in the sale of phony certificates ranging from diplomas all the way up to Master’s degrees for $4,000 each.

Prospective buyers are instructed to initially pay a 30% deposit, and then to pay the balance upon delivery of the bogus certificates.

Since the scam has now come to light, the Ministry has notified the public that “any person found in the possession of any such documents will be liable to imprisonment for two years under the Belize Criminal Code, Revised Edition 2000 Chapter 101 of the Laws of Belize, which refers to the Forgery of documents, processing of false documents and the procurement of documents.”

It added that “those found guilty of being a common forger are liable to a maximum sentence of up to life imprisonment.”

In mid-December 2014, alarm bells were sounded when a newly promoted employee of the Belize Tourism Board (BTB) suddenly resigned in the wake of reports that he had submitted false university records to qualify for a senior post that was vacant at the time.