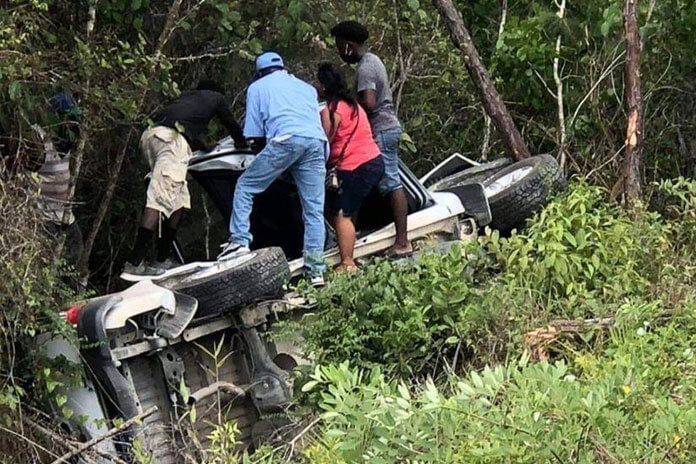 BISCAYNE, Belize District, Tues. May 19, 2020– Four road traffic accidents which took place on the Philip Goldson Highway, the Hummingbird Highway and the George Price Highway resulted in eight persons suffering varying degrees of injury. Luckily, there were no fatalities, but some persons remain hospitalized for their injuries.

Two men traveling in the pickup were trapped in the vehicle, but they suffered only minor injuries. The men were taken to the Western Regional Hospital, where they were treated and released.

The second accident occurred at about 6:30 Sunday evening in Biscayne between Miles 23 and 24 on the Philip Goldson Highway. Michael Magaña, 49, a laborer of Biscayne, was hit by the mirror of a pickup that overturned during an attempt by the driver not to hit him.

Magaña was later treated and released.

Police said that Magaña was walking across the highway in the village when the pickup, traveling to Belize City, swerved to avoid hitting the crossing Magana, but despite the maneuver, he was hit and the pickup flipped and landed in the drain on the side of the road.

They were first taken to the Biscayne Village Medical Center, where they were given initial treatment by the village nurse, then they were taken to the KHMH for further treatment.

A third accident occurred at about 9:00 last night. Jose Vasquez, 28, a farmer of Harmonyville, Cayo District, was driving home from Roaring Creek on his motorcycle when, on his arrival between Mile 47 and 48, on the curve on the George Price Highway, Vasquez lost control of the motorcycle, which caused him to fall off the motorcycle and onto the pavement.

The fourth road traffic accident occurred at about 10:30 last night near The Blue Hole National Park, between Miles 37 and 38 on the Hummingbird Highway. Two workers from Western Dairies of Spanish Lookout were driving the company delivery truck from Independence, in the Stann Creek District, to Spanish Lookout when on their arrival near the Blue Hole the driver lost control of the truck, which slid off the road due to loose gravel that was on the road because of road repairs that were being done.

The vehicle overturned. The driver, Alex Hernandez of Santa Elena, suffered only minor injuries, while his worker, Byron Catalan, suffered injuries to his shoulder, left foot and his head, but those injuries were not considered life-threatening.

The men were taken to the Western Regional Hospital, where initially Catalan was held for observation and Hernandez was treated and released. Catalan has since been released.