Elena Smith is new Senator for unions and civil society 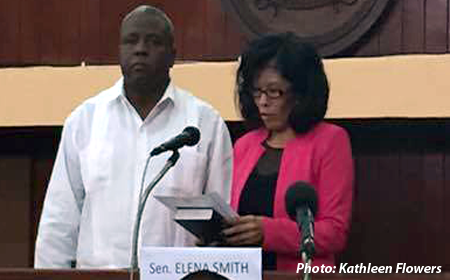 BELIZE CITY, Wed. Jan. 27, 2016–The newest appointee to the Senate is trade unionist Elena Smith, who was formally sworn in when the Senate met on Wednesday at the National Assembly in Belmopan for its first sitting for 2016.

Asked how she plans to go about discharging her duty as Senator for both the civil society and trade unions, who may at times hold opposing views, Smith—who served for 8 years as president of the Belize District branch of the Belize National Teachers’ Union (BNTU)—told Amandala that, “…at the end of the day, I am there to look out for the good of the entire group that I serve, that I represent and so I cannot go based on people’s emotions. I have to look at whatever is put in front of me objectively, because I myself have to offer some kind of position as a senator.”

Smith, who said she was nominated by the National Trade Union Congress of Belize and supported by the Maya Leaders Alliance, said that the parties, the unions and civil society agencies, had met prior to her selection and discussed multiple nominations, and after the parties conferred with each other, she was selected for appointment as senator.

Amandala understands that Smith will serve as interim senator until the parties work out a formal mechanism for the appointment of a senator to represent them, as well as a protocol for consultation on parliamentary matters and a mechanism for removal in cases where a senator comes under fire for not properly representing the interests of the parties represented in Parliament.

The review is critical for civil society partners who want to be more involved in the business of the Senate.

Smith said that the plan is for the establishment of a group of advisors, drawn from both the unions and civil society, who are expected to dialogue on proposed motions and legislations before she attends Senate meetings.

The last senator to represent the parties in Parliament, trade unionist Ray Davis, came under fire last year after it had been alleged that he voted contrary to the union’s stance on the PetroCaribe matter; however, at the time, there was no clear consultation framework for the parties. For his part, Davis had indicated that he had reached out to union executives for their input on multiple matters but his requests for input were often ignored.

Smith emphasized the need for the parties to communicate, and she urges the stakeholders to take the business of parliament seriously.

Our information is that Governor-General Sir Colville Young had written the parties pressing them to proceed with the senatorial appointment. After general elections were held last November, a new senate was installed but the seat for civil society and the unions was vacant until this Wednesday, when Smith was sworn in.