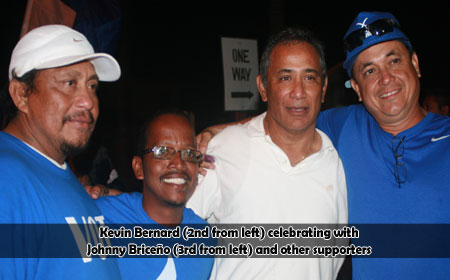 ORANGE WALK TOWN, Thurs. Mar. 5, 2015–Mounting anxiety that had built up for almost 10 hours after the commencement of vote counting and reconciliation within the walls of the La Immaculada RC Primary School in Orange Walk Town was finally cleared away at approximately 3:55 a.m. today when it was announced that incumbent People’s United Party (PUP) mayor, Kevin Bernard, and four of his councilor candidates, managed to secure a much needed municipal victory for their party.

With a total of 63 ballot boxes – most of which contained split votes – Orange Walk was the last of all municipalities to be tallied, and at the culmination of counting, went on record as the sole triumph for the seemingly beleaguered Opposition PUP, which has now been defeated in the last four municipal elections (2006, 2009, 2012, and 2015).

Outside the counting station, the throngs of UDP supporters who had stood around to listen to the final results, had mostly dissipated in the face of persistent reports that they had fallen behind during the counting process, but a crowd of about 100 enthusiastic PUP loyalists – invigorated by the welcoming news – held their ground, continuously waving their blue-and-white flags and reciting party slogans.

Shortly after the late night PUP victory was validated, Amandala spoke with returning Orange Walk mayor, Kevin Bernard, who will be leading a split council as part of his second term, and he implied that the financial resources of his opponent were ineffective at the polls today.

When the solid votes were counted a little after 9:00 p.m. yesterday, the PUP had already been in the lead by some 100 ballots with 1,163 split votes left to be sorted out, and although there were instances where the race even seemed too close to call, most of the PUP candidates maintained a steady lead ahead of their opponents as the night progressed.

Bernard had often complained about the manner in which his council is treated by the United Democratic Party (UDP) central government, which he criticizes for only paying attention to UDP city and town councils, and therefore, we questioned him about how he plans to navigate around that relationship over the course of his new term.

“Well actually, we had done it while facing many debts, but this time, we have cleared ourselves from many of these debts, so I believe that we will be able to do more [for the people of Orange Walk], and I am very, very confident that we will continue to deliver to the people”, he answered.

Orange Walk is notably the only municipality that elected a PUP town council in the 2015 Municipal Elections, and according to Bernard, that shows that Orange Walkeños have been “seeing the light”, but at the same time, the party needs to “take stock of itself, regroup and unite as a party.”

In any event, several political analysts have credited Orange Walk Central area representative and former PUP leader, Hon. John Briceño, for the PUP’s success in that municipality based on both his groundwork and resounding popularity in that area.

While he was able to garner 3,873 votes, Bernard’s fellow councilor candidate, Ladrick “Mad Bull” Sheppard, topped the polls with 4,218 votes.

Bernard told us that the PUP Town Council slate will hold a victory rally which will coincide with the inauguration of the newly refurbished Orange Walk Central Park this Saturday, March 7.

They will be joined at Town Hall by two UDP councilors in the persons of Louigie Gomez and Shartel “Shantel” Casimiro, who are both political newcomers.

Amandala managed to speak with Casimiro, who said that she was grateful for the opportunity to be a part of the council, even if she is one of the only two UDP councilors on that team.

She said, “I’m here to work. I’m also someone who stands my ground, and when I enter [the Orange Walk] Town Hall, I will be there to work with them because the people elected me to work, so I hope that they [the council] will welcome me [on their team].”

At 5:00 p.m. yesterday, the voter turnout averaged 43% (5,083 voters) of the total 11,777 registered constituents, but by the time the night was over, Orange Walk had recorded the highest percentage of voter turnout for the 2015 municipal elections across the country at 68% (8,029 voters).