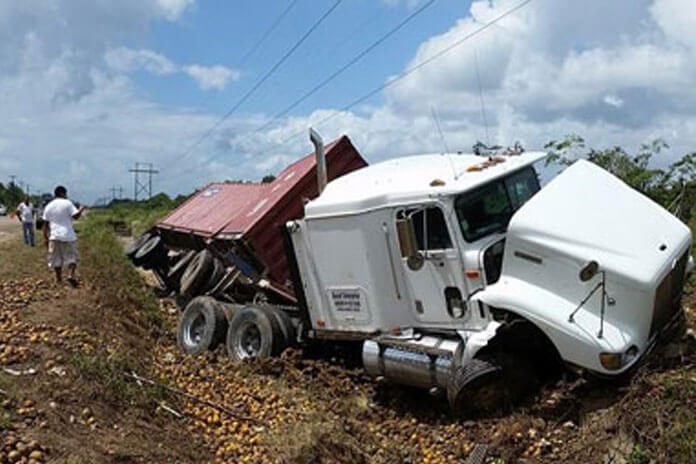 BELIZE CITY, Fri. Dec. 6, 2019– In February 2015, there was a horrific accident between Miles 36 and 37 on the George Price Highway, when a blue Suzuki SUV transporting tourists to Jaguar Paw was hit from behind by a tow-head truck that was transporting oranges.

The accident claimed the life of American national Theresa L. Meuers, 56, who worked in the US healthcare sector, who was seated in the back seat of the SUV; another cruise tourist in the SUV, Samuel Schulte, 66, was hospitalized and two others were injured.

Behind the wheel of the SUV was Leon Rodriguez, a 30-year-old tour guide employed by Big John’s Tours and Taxi Company. The driver of the towhead was 20-year-old Miguel Arriaza, who was driving his father’s truck.

A lawsuit filed at the Supreme Court by Alpha Services Limited, the Administrator ad Litem (for someone who cannot act on their own) for Theresa L. Meuers, has named both drivers and their employers in a wrongful death lawsuit.

The court papers were filed by attorney Stevanni Duncan from the law firm of Barrow and Williams, and in those papers it is stated that the lawsuit seeks to recover “damages to be assessed for the wrongful death of Theresa Meuers … special damages in the sum of US $76,589, interest pursuant to section 166 and 167 of the Supreme Court of Judicature Act, such further or other relief as may be just, and cost.”

The particulars of the negligence of the second defendant include allegations that he drove at a speed which was excessive under the circumstances; failed to have any or sufficient regard for traffic that was or might reasonably be expected to be on the highway; failed to apply brakes in sufficient time or at all; failed to stop, slow down, swerve or otherwise control the motor vehicle so as to avoid the collusion; drove without due care and attention and without regard to other road users; drove a motor vehicle with a trailer carrying a load in excess of its authorized legal maximum gross weight or alternatively; and drove a motor vehicle with a trailer carrying articles for which he did not have a license.

The death of the deceased was caused by the negligence of the first and second defendant, the court papers said.