Ex-cop busted with kilo of cocaine 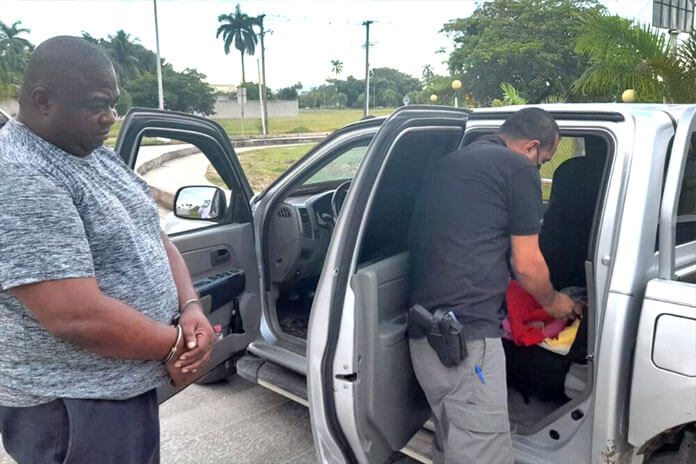 BELIZE CITY, Sun. Nov. 21, 2021 — Last Thursday, a retired police officer was charged with a drug trafficking offense after he was found with one kilo of cocaine in Belmopan around 5:00 p.m. on Wednesday. Inez Castillo, 53, was stopped by a team of officers who had received information which indicated that he was in possession of cocaine, and this was later confirmed when a brick of cocaine was found wrapped in a red shirt stuck behind the back seat of Castillo’s Toyota Wingel pickup.

“It was learned that Mr. Inez Castillo had dropped off a senior retired officer yesterday at the Police Training Academy. As such, upon the Commissioner being informed of such, he instructed that because he went to the residence of the Commandant of the Police Training Academy, that a search be conducted on that premises, which was done,” Commander of Operations of the Police Department, ACP Alford Grinage, told local reporters at a press briefing on Thursday evening.

He said that K9 unit dogs were also deployed, but no drugs were found on the academy’s premises. While the police do not believe that the cocaine found in Castillo’s truck was in fact sourced from the academy, the move by the Commissioner of Police to order a search of those facilities suggested a marked suspicion of police officers and their involvement in narco-trafficking.

At this time, police are unable to determine what circumstances led Castillo to transport the other police officer to the training school. That officer, according to Grinage, had gone into retirement just the prior day.

“I know that he and the individual that we spoke about, who retired yesterday are friends and we can’t say what was the purpose of him dropping him off at the training school, but the fact that he did, we didn’t want to take no chances for speculation, hence the reason as I mentioned we went ahead and searched the residence.” Grinage said.

ACP Grinage said that they do not believe that the drugs were picked up from the academy, since the retired officer was dropped off on the compound, which is in open view, and not in the more private residence area. He said that the retired officer and the commandant at the training academy were questioned and they both indicated that they had not been aware that Castillo had drugs in his possession.

Police also do not believe that the drugs found in this recent bust were from the cargo that was unloaded following the landing of a drug plane in Bladen village, Toledo, earlier this month. ACP Grinage said that the packaging of the drug found with Castillo is different from the packaging of the cocaine unloaded in Bladen. It must be noted that the packaging in which bricks of cocaine are placed can be changed or altered with little effort, but Grinage said that the brand of the package found in Castillo’s truck is similar in appearance to the parcels retrieved from the Placencia drug plane crash which occurred earlier this year.

ACP Grinage said that only the samples of the Bladen cocaine that are being kept for evidence were not destroyed in the recent drug burning. “All the drugs from the Bladen drug bust has been destroyed, except for samples that were taken out of those packages that should have, that is, will be kept into police evidence until we proceed at court. Also, the brand of that specific parcel is different from those ones found at the Bladen. So, we don’t suspect it is that, any at all,” he said.