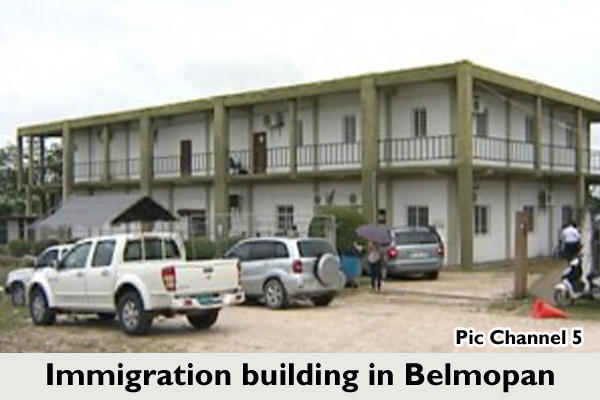 Those interventions might have led to money launderers, human traffickers, international criminals and other unqualified persons receiving Belizean passports and visas.

Although the audit has been aired publicly, with all its unsavory revelations, it appears that past UDP ministers, amazingly, continue to frequent, and intervene in the services the department offers, with one minister in particular reportedly spending nearly as much time at the department as regular employees.

That minister has not been named, but in her testimony before the Senate Select Committee today, Immigration Director Diana Locke claimed that she cannot stop him from entering the department.

The Ministry was told about the continued, bare-faced hustling by the ex-ministers, but it did nothing, said Immigration Director Diana Locke

That’s what she said to Senator Mark Lizarraga when he told her about a visit he made to the Immigration Department some time ago.

“The last time we visited the department, we encountered at least one ex-minister, as you know, who openly professed to be an agent,” Lizarraga said, “and we understood from people that there is another minister that provides similar services and is frequently at the department. How do you feel about that, and what, if anything, are you doing to address this influence that they may or may not have?”

She went on to state, “I have raised this matter with my ministry, because I don’t like the image that it portrays because it gives the impression that the department is facilitating the request of the political directorate, which is not the case, and I have spoken to that individual.”

“He persists on coming back. He says that it is a public place and he has had a lot to say, but I have to put that aside, because it is not the right thing to do. The staff has already been informed and I’m sure he’s listening to me today. The staff has already been informed that when we go to our new location, that no member of the public will be allowed behind the counter in any of the areas we have, and we are taking steps to actually put fingerprint machines so that areas are actually restricted, and only those persons who work in those areas can access those areas,” she said.

Locke further explained, “In my office I would look up at the screen, because we do have cameras. I don’t have time to watch them very often, but you do see a few people who I have begun to identify as agents when I see them often enough.

“As I have said before, and as I will say again, I don’t think that is a healthy process. I don’t like it because it gives the impression that there are some people that are more favored. Our regulations in our laws require that persons appear. I have no objection to a family member. You coming in and on behalf of a niece, a nephew, a child, but when a person continues to be there on a regular basis, clearly, nobody spends that amount of time in any location for nothing. These are people whom, I’ve been told, have been frequenting at Lands; they’re now at Immigration.”

Lizarraga, clearly astounded by this revelation, said: “But with the greatest of respect, Director, one would think that you could clearly set areas that are off bounds to the general public.”
In response to that, Locke said: “Yes, we do.”

“But that is not being adhered to,” Lizarraga said. “Is that what you are saying?”

“Yes; sometimes that is the case,” Locke said.

Lizarraga asked her if it had to do with “who these individuals are?”

Locke responded that of recent, “there has only been one individual that’s really persistent and we know who he is.”

“We know who he is,” Lizarraga said, “but I’m saying…why is it you feel you cannot stop him from entering beyond the front line where the general public is supposed to be, at least?”

“Out of respect for the fact that that individual was a former minister. I have addressed this matter with my ministry,” Locke said. “I cannot stop that individual if he wishes to go on the second floor, if he wishes to have a meeting with my CEO, or my minister, but I do have objections to his being in and around the office with the frequency with which he does it.”

According to Locke, she is hoping that the Immigration Ministry will address this issue.