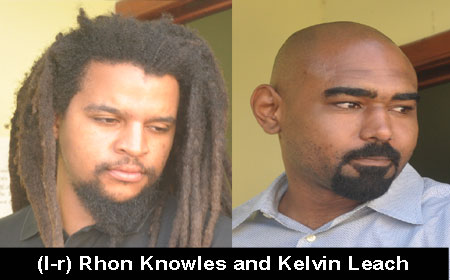 BELIZE CITY, Fri. Mar. 15, 2019– In September 2014, Bahamian nationals Kelvin Leach and Rohn Knowles were the subject of national headlines when their business place, Titan International Securities, located in the Matalon Building on Coney Drive, was raided by Belize law enforcement agents at the behest of agents of the United States Government.

Leach and Knowles were carted off to prison on the strength of a United States extradition request to the Belize Government when the US named them, along with several others, in an unsealed indictment alleging that they had committed securities fraud, money laundering and tax fraud in a scheme which stripped the US of $500 million in taxes.

The extradition request, however, was laden with procedural errors from its inception and today, the Belize Court of Appeal ended the extradition case against Leach and Knowles when it ruled that the United States had violated Belize’s Telecommunication Interception Laws by its interception of the communications of Leach and Knowles, which is also in violation of their constitutional rights to be free from arbitrary search and seizures.

The evidence that the US was relying on to secure their extradition was obtained unlawfully, the Appeal Court found.

On September 29, 2014, after they were held at the Belize Central Prison for a short time, Leach and Knowles appeared in the Supreme Court and were freed on $50,000 bail each when Justice Denis Hanomansingh ruled that the arrest warrants used to imprison the men were flawed.

Leach and Knowles became the first persons in Belize to be granted bail while awaiting a US extradition trial. The formal extradition papers would later arrive from the US in December 2014.

The winning streak of the two investment bankers continued when they prevailed against the Belize Central Bank, which the Supreme Court had ordered to return 1.4 million US dollars that it had seized when the Financial Intelligence Unit and the Belize Police Department raided their offices.

The two would later go on to succeed in court against the government in a lawsuit for damages and won a multi-million-dollar judgment. The amount awarded in that judgment, however, was substantially reduced on appeal by the government at the Caribbean Court of Justice.

Leach and Knowles, through their attorneys, had launched a challenge against the evidence and the method used by the US to collect that evidence.

Justice Arana ruled that the application for “case stated” was premature and she sent the extradition case back to the Magistrate’s Court for trial.

Leach and Knowles’ attorneys made another legal maneuver. They appealed Justice Arana’s decision and this effectively stayed the extradition case until the appeal was completed.

That appeal was heard yesterday, Thursday, and attorneys Eamon Courtenay, S.C., and Leslie Mendez argued that the US did not follow the procedures that were set out in Belize’s Interception of Communications Act, and they had failed to observe the mechanisms that were set out under the 2000 Extradition Treaty signed between Belize and the US.

The Attorney General’s Ministry, which represented the US, attempted to counter the argument advanced by Leach and Knowles’ defense team, submitting that the arguments were premature and would best be left to a US judge, if the men were actually extradited.

The court had reserved its decision after hearing the arguments yesterday, but they managed to arrive at an oral decision, which they delivered today. They will hand down a written decision at a later date.

President of the Court of Appeal, Justice Manuel Sosa, announced that the process to extradite Leach and Knowles is to be permanently stayed, because the evidence against them was unlawfully obtained in violation of their constitutional rights.

“And they did so in violation of the Constitution of Belize. You will recall that in the Rhett Fuller extradition decision, the Privy Council held that if it is unconstitutional to extradite someone, it’s an abuse of process, and it should not happen.

“We made submissions to the court that when you do surreptitious interception of communications, without judicial authority, it violates your right to privacy, and your right not to be subject to arbitrary search and seizure.”

“Clearly, the Court of Appeal agreed with us, and felt that the United States acted unconstitutionally in Belize, and that to proceed with the extradition would be an abuse of process and unconstitutional. And therefore, they forthwith released Mr. Knowles and Mr. Leach,” he said.