Farrakhan cites “The Great Command” as solution to Belize’s tribulation 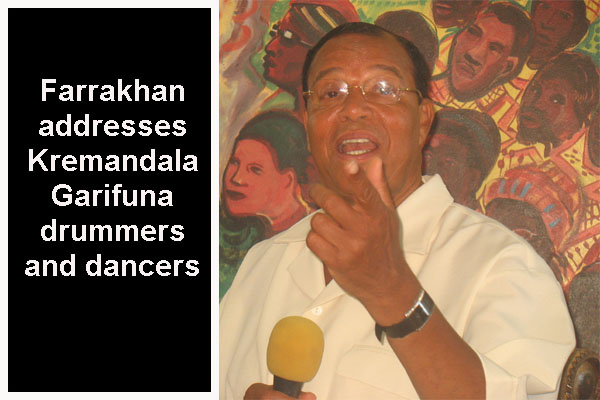 The US-based Islamic leader Louis Farrakhan, 79, was hosted at Kremandala on Tuesday morning, and he paid a courtesy call to the Library of African and Indian Studies, located upstairs Amandala, after his appearance on the KREM WUB Morning Vibes, where he had a chance to meet executives of the UBAD Educational Foundation, Kremandala staff and friends, who came to greet him.

Farrakhan paid special respect to the children of the KWANZAA Club, led by Virginia Echols, and one youth named Joshua was so overwhelmed, he left the room in tears. But Joshua returned boldly during the latter part of the presentation and he had the opportunity for a short tête-à-tête with Minister Farrakhan, who told him that he has “a very special name.”

Indeed, Joshua is the English version of the name of the Hebrew Yisraelite Messiah called Jesus; His Hebrew name is YAHUSHUAH, meaning YAHUAH, the Great I Am, is Savior.

Whereas Farrakhan brought a message of liberation for the people of Belize, it is noteworthy that his message’s central high note this morning was one of love.

“I love you,” he told Joshua, when he emerged to take his place among those gathered at the library.

Farrakhan would have more to say about Joshua—the Scriptural and historical YAHUSHUAH—and His teachings at the climax of his presentation, when probed by KREM’s Perry Smith, also known as “Sticks,” on how Belize could attain its liberation from the state of affairs that is visiting much suffering upon the youth, in particular.

First, Farrakhan spoke of the importance of keeping the vision for our people at the forefront of our minds.

“When UBAD [the United Black Educational Foundation] started, all of you together, all of you with a mind on the goal, which is the liberation of our people, the goal is bigger than you and me and us, [but] once the goal is diminished then my fault and your fault becomes the thing we talk about,” the minister said.

He emphasized, though, that our problems sink into nothingness when our visions are held high.

Then he gave the whole conclusion of the matter, citing MattitYahu (Matthew) chapter 22, verses 34 to 40.

“There are two commandments that [Joshua] gave,” said Farrakhan, explaining that all the other commandments hang on those two.

“What are those two? First you have to understand that [The Almighty] is sufficient. When you are one with [The Most High], you are the majority against 7 billion people on our planet,” he explained.

He said that once you put your faith and your trust in your Creator, this can be accomplished.

Going back to the words of YAHUSHUAH, Farrakhan recalled: “He said love with all your heart, your soul, your mind, your strength…”

Islam is a worldwide spiritual nation which has sprung out of the faith of Abraham, who himself walked in this great command, as stated in Genesis 26:5.

It is written, “…Abraham obeyed my voice, and kept my charge, my commandments, my statutes, and my laws.”

Farrakhan said that the reason he is so blessed, is because he is in love with the Almighty.

Every time he sees a tree, a flower, a human being, he sees the creation of The Almighty.

“The second commandment is like unto the first: love your neighbor as yourself,” Farrakhan went on to emphasize. “And the problem with us is that they never taught us our self-knowledge, that we could truly love who we are. That’s why my sister [YaYa Marin-Coleman] had to tell the children, ‘Put a mirror up in front of your face and tell yourself you are beautiful…’”

On these two commandments: love for The Almighty and love for neighbor as ourselves, said Farrakhan, hang all the commandments.

As Joshua (YAHUSHUAH) said, all the laws written in the Books of Moses, and all oracles coming from the prophets speaking by the set-apart Spirit, hang on the fundamental principle of love, Farrakhan said.