The daughter’s husband was the driver 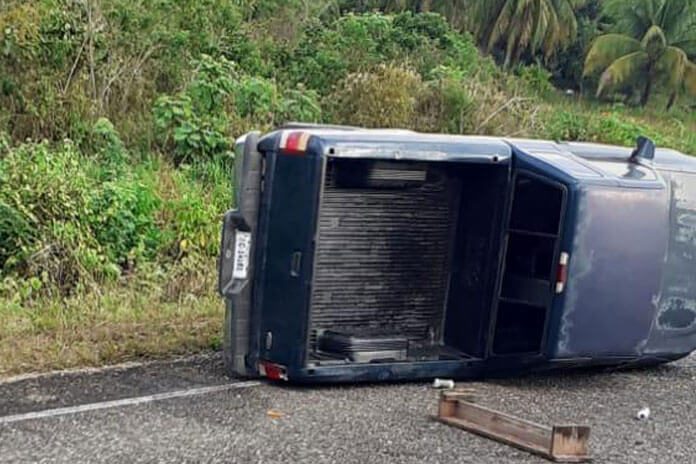 They were thrown out of the pickup pan of the Ford Ranger in which they were riding when the driver, Cal’s husband, Jose Cal, lost control of the pickup, which flipped and landed on its right side.

Erlina Cal and her father were hurled onto the pavement, and suffered massive head and body injuries. Teul died almost immediately, while Erlina Cal was rushed to the Punta Gorda Community Hospital, but died on the way.

Jose Cal, a security guard of Bella Vista, told police that he, his family and his in-laws, were traveling in his pickup from Indian Creek to Bella Vista this morning when on his arrival in the area, he dozed off behind the wheel, and as a result lost control of the pickup, which ran off the road.

His wife, Erlina, and his father-in-law, Pasha Teul, were riding in the pickup pan, and those traveling in the front of the pickup were Erlina’s mother, Evelyn Teul, 46; Rashal Choco, 6; Marcus Teul, 75, and Erlina and Jose Cal’s one-year-old son Kylene Cal.

Jose tried to bring back the vehicle onto the road, but it overturned, causing his wife and his father-in-law to be thrown out of the pickup.

The members of the family who were traveling in the cab all suffered varying degree of injuries, and complained of body pain.

Police said that on their arrival on the scene, they saw the body of a man on the right side of the road, identified as Pashal Teul, and Erlinda Teul Cal, who was seen breathing heavily. She died on the way to the hospital.

A Notice of Intended Prosecution has been issued to Cal.