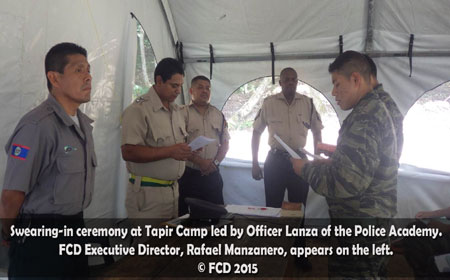 BENQUE VIEJO, Mar. 15, 2015–On Saturday, March 14, at an event held at Tapir Camp in the Chiquibul National Park, eleven park rangers of Friends for Conservation and Development (FCD) were sworn in as special constables by members of the Police Department.

The training conducted by the Police Academy was led by Sergeant Magdaleno and Corporal Tun, while swearing in was led by Inspector Lanza.

The purpose of the training was to enable FCD rangers to be more effective in addressing illegal activities occurring within the boundaries of the Chiquibul National Park and to help regulatory agencies maintain law and order.

The Special Constable Training Program, forms part of a Specialized Ranger Training, now underway in the Chiquibul National Park for FCD rangers that will culminate on Thursday, March 19 at Tapir Camp, when graduation will be held for the rangers.

Thanks to people from across Belize and abroad and to the Government of Belize, who have helped us to increase the ranger unit. FCD has hired new rangers who have been under the rigorous specialized training program since January.

Once the rangers have passed the training, these young men will find themselves operating in the furthest reaches of the park, starting a new phase of environmental monitoring and SMART patrols.

The intent will be to document the actual conditions of the park, to protect biodiversity and reduce the threats to the natural environment.

FCD has been co-managing this area together with the Forest Department since 2007. Access into the CNP from the Belizean side is essentially limited to one road, that comes from the Mountain Pine Ridge and crosses the Macal River at the Guacamallo Bridge.

To learn more of this exuberant forest visit www.fcdbelize.org and FCD’s Facebook.