Felicia Chen, 22, has her triple murder case committed to the April Session of the Supreme Court 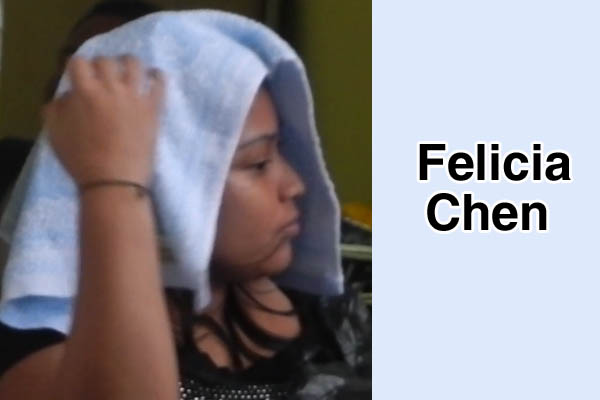 Chen is accused of drowning three of her four children at Belizean Beach on April 27, 2013

This morning, Felicia Chen, the 22-year-old mother accused of killing three of her four children, had her triple murder case committed to the April 7, 2014, session of the Supreme Court.

At her last adjournment, Chen was released from the mental facility that housed her since her arraignment in April, and sent to prison to await her trial. When she arrived this morning, it was by way of the prison bus, and without the protection of a special escort, which had been afforded to her in her previous court appearances.

She was handcuffed as she walked from the bus, and was not hidden or guarded from the lens of our cameras, as she had been when she had appeared in court previously.

Chen and her lawyer, Antoinette Moore, were present before the Chief Magistrate Anne Marie Smith, when Alford Humes, an attorney in the Director of Public Prosecutions’ Office, presented the case bundle to the court after the Chief Magistrate ruled that Chen had a prima facie case to answer.

That case bundle included statements from Chen’s only living child, from the father of the children, police officers, police coroner Dr. Estradabran, and Chen herself.

Documentary exhibits were in the form of birth and death certificates of the three children, the arrest warrant, a caution statement from Chen and postmortem reports.

After the bundle was presented to the court, Moore indicated that her client would not be calling any alibi witnesses for the trial.

Chen is accused of taking her four young children to the Belizean Beach on George Price Highway on April 27 this year, and drowning three of them one by one. The eldest child realized what was happening and ran toward the roadside, where she alerted a woman as to what was happening.

That woman then alerted a police officer who was at the checkpoint to the entrance to the beach, and he was able to recover the bodies of the children.