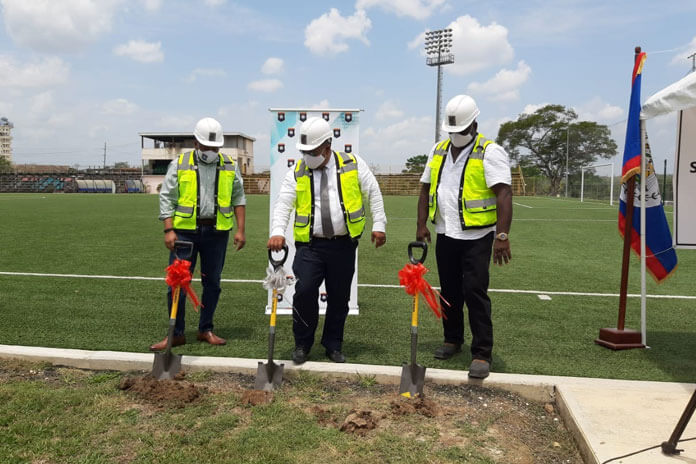 BELMOPAN, Wed. May 20, 2020– If all goes according to plan, Belize may soon have a world-class FIFA approved stadium at the Football Federation of Belize (FFB) facility on the Hummingbird Highway approaching Belmopan, where it already possesses a FIFA-Pro Pitch, completed last year; and today the ground-breaking and signing of a contract was done for Phase One of its Bleachers Project, which will see the construction of state of the art cement bleachers on both the eastern and western borders of the football pitch. (Phase Two later will be a VIP Facility with shed.)

Due to the Covid-19 restrictions, it was a small gathering at 10:00 a.m. on site for the occasion at the FFB facility, but the events were live-streamed to football stakeholders countrywide, beginning with an Opening Prayer by FFB General Secretary, Earl Jones; followed by Welcome remarks from FFB President, Sergio Chuc; a Project Overview by FIFA Forward Development Manager, Ray Davis; a few words of Congratulations from Minister of Education, Youth & Sports, Hon. Patrick Faber; and a brief historical review and Thank You remarks by FFB Senior Vice President, Marlon Kuylen. Following the symbolic ground-breaking, the BZE $2.44 million contract was signed by FFB President Sergio Chuc and Stephen Coleman of Coleman Construction Ltd., the choice from among three bids, after five local construction firms had expressed an interest in the project.

It was a bright day for football, both literally, with blue skies and sunshine (though no games are possible yet due to the Covid-19 State of Emergency), and figuratively, with the great strides being made in our football infrastructure, as well as the cohesive and progressive leadership on display by the executive and staff of the Football Federation of Belize.

Noting the timely process of planning and execution of the present project, president Chuc opined that, “In Belize we need to think long term,” emphasizing the point that the planning stages of the project took over a year, and the completion date of Phase One is next year June. But the long term impact is great: “I see football as an industry … and this is going to bring jobs to Belize,” and thus have a “positive economic impact in Belize.” In this regard, he noted that when the FFB managed to convince UNCAF to host a regional U-15 tournament last year at the Isidoro Beaton Stadium, over the 10 days of games, around $500,000.00 of foreign exchange was pumped into the Belizean economy through hotels, food, travelling, etc. With the completion of the world class facility at the FFB Stadium, the FFB will be able to host much more prestigious international tournaments, with greater benefits to the Belizean economy. (Presently, over 250 jobs, including players, coaches and team personnel are affected due to the suspension of Premier League games.)

Project Manager, Ray Davis, who was responsible for accessing the funding through the FIFA Forward Development Programme, explained that the total project is for Bze $2.5 million, $2.4 million being for the contract being awarded for the actual construction of the Bleacher Project. He took the opportunity to explain that the FFB’s long term plan is built upon 5 strategic pillars: 1. Governance, 2. Capacity Building, 3. Competitions, 4. Infrastructure, and 5. National Teams. “We believe that if we do 1, 2, 3 and 4 properly, it will impact on our National Teams.” In regards to Infrastructure, which was the focus of today’s event, Davis emphasized that, “We want facilities that are safe, functional, attractive, environmental friendly, sustainably managed, and energy efficient. And this project that we have today, we think fulfils all of those aims that we set for ourselves.” The bleachers to be constructed, he explained, will cater for “differently abled” fans, who will be able to access comfortable seating with the use of their wheelchairs. And the project has a solid maintenance and insurance plan, satisfying FIFA requirements.

Minister Patrick Faber congratulated the FFB on this “feather in their cap,” and commended the FFB for taking the lead. “I always say that the efforts that you’ve made … that of all the associations and federations … at this time, the FFB is taking the lead in advancing its sporting discipline.” And he pledged the continued support of his ministry “for your ventures, for your efforts to improve the discipline of football, and overall sporting in Belize.”

In his Thank You remarks, FFB Senior Vice President, Marlon Kuylen recounted some of the tremendous progress made by the FFB over the past couple years since this administration embarked on its Strategic Plan, with focus on Good Governance and Capacity Building; and he especially commended president Sergio Chuc for his dedicated leadership, and his hard working executive and staff, including the district associations.

The Project Unit team to manage the implementation of the Project consists of Project Manager Ray Davis and FFB General Secretary Earl Jones. And the engineer interfacing with the contractor in the day to day on the ground operations on behalf of the FFB is Robert Allen.

Facebook
Twitter
Pinterest
WhatsApp
Print
Previous articleThe May 29, 1972 riot— how print media of the time viewed it
Next articleWe need to “big up” the good cops