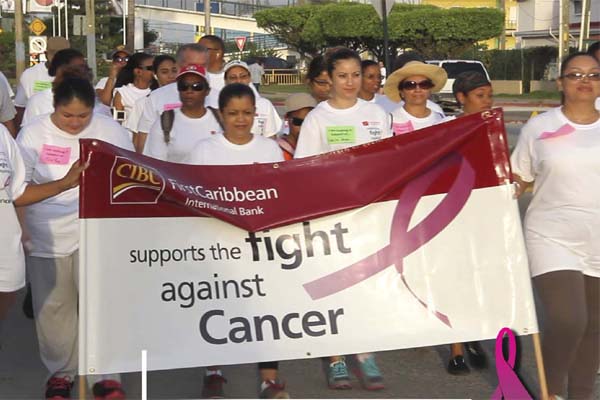 Cancer is a scourge to our society, and in Belize, this ‘silent killer’ accounts for roughly more than 12 percent of deaths every year. It is a disease that has taken many lives and has no cure.

October has been set aside globally as Breast Cancer Awareness month, and FirstCaribbean International Bank has joined in the effort to promote awareness and expand public consciousness into the lethal illness.

FCIB employees, along with their families and friends, took part in the 2013 CIBC FirstCaribbean Walk/Run for the Cure this past Saturday to coincide with the yearly observance. CIBC FirstCaribbean first organized the event last year, as part of its 10th anniversary activities, and CIBC employees took part in the event in a bid to raise awareness of and support for the fight against all types of cancer.

Prior to the walk, Amandala spoke to Rosanna Villanueva, Business Support Officer at the FirstCaribbean Bank Albert Street branch headquarters, who informed us that the exercise, referred to as “Walk for the Cure”, was being organized for the second year under the auspices of their parent company, CIBC (Canada), which operates 17 businesses across the Caribbean.

CIBC FirstCaribbean’s 17 businesses across the Caribbean have either hosted their own event, or will join one of the national cancer organizations.

The walk in Belize was set for Saturday, October 5, 2013. Employees of FirstCaribbean have made personal contributions and also taken part in fundraising events over the last two months as part of the activities leading up to the walk. All funds raised are in aid of the Belize Cancer Society. Additionally, persons who registered for the walk were asked to make a $10 contribution, which will also go towards the Belize Cancer Society.

In a press release issued today, FCIB country manager Glen Smith commented: “CIBC FirstCaribbean in Belize is committed to supporting causes that positively impact the communities in which the bank & its staff operate. We are also encouraging our employees to make that personal effort to become more involved. The Walk for the Cure provides us with an opportunity to both raise awareness about a disease that has impacted the lives of many Belizeans and to also assist the Belize Cancer Society in carrying out its invaluable work.”

The “Walk for the Cure” took place in Belize City at 6:00 a.m. on Saturday, October 5. It started from the Belcan Bridge, and participants made their way through city streets wearing specially designed T-shirts and handing out cancer information leaflets to the public along the way.

The bank has established a number of accounts at its branches across the Caribbean, into which the public may deposit their donations. The account number for Belize is 10215174.