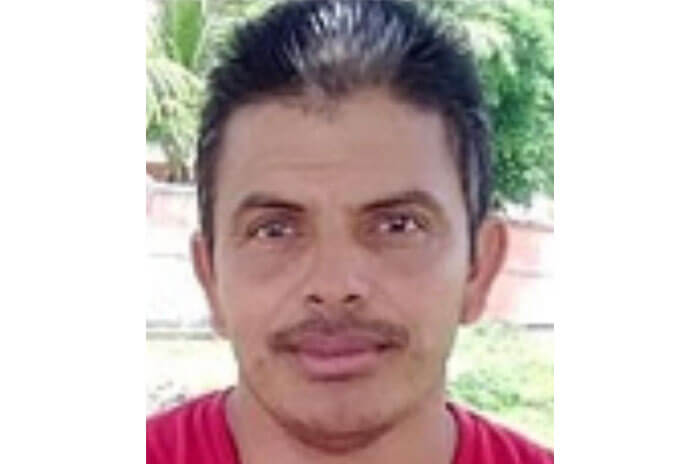 DANGRIGA, Stann Creek District, Fri. Nov. 26, 2021 — Police are asking the public’s assistance in finding 43-year-old Dangriga resident Wilmer Herrera Limas, who was reported missing on Thursday, November 25, following a shooting incident that occurred off the coast of the Riversdale area.

Reports are that Limas, who is a fisherman, and his son, Anuar Limas, were out on a fishing trip on the Captain Wilmer vessel when, about 2 hours after their departure, the engine of their boat began to malfunction, so the duo anchored the boat and attempted to repair the engine.

While carrying out those repairs, another boat approached them, and the persons on that boat questioned them about what they were doing in the area. According to Anuar Limas, before Limas and his father could respond, a gunman fired several shots in their direction. Anuar reported that the captain of the other boat, a dark-complexioned man, then grabbed his father and pulled him onto their boat. During the encounter, Anuar received two gunshot wounds — in the lower back and the left forearm, and he reportedly collapsed onto the deck of his boat.

He noticed at that point, however, that the gunman’s firearm had jammed, which allowed him to reach for the throttle and escape immediate danger. He reported that during his getaway attempt he heard a single gunshot. He said that he had shouted for his father, but heard no response. After the encounter, Anuar headed back to Dangriga Town, but decided not to file a police report, since the nightly curfew had started. The next day, he visited the Dangriga police station to inform them of the abduction and possible shooting of his father.
Police are currently investigating the situation, and there is speculation that the attackers may have been connected to the Wednesday night narco plane landing in Kanantik. Further complicating the issue, Limas was unable to indicate to the police where the incident happened or to provide a description of his attackers. The police, however, did find two bullet holes in the stern of Limas’ boat.

The police are asking anyone who may have credible information as to the whereabouts of Wilmer Limas to contact the department via 911 or 922. He is described as a middle-aged Hispanic man with a fair complexion. He is slim, has a narrow face with straight, black hair, and is 5 feet 5 inches tall.