Fisherman and Land Consultant Charged For 5 Kilos of Cocaine, and Firearm and Ammunition 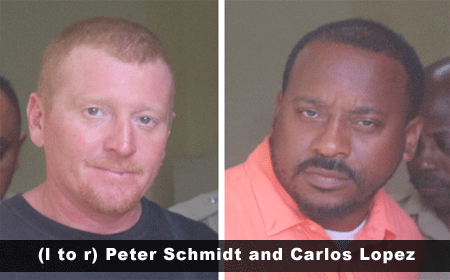 BELIZE CITY, Tues. Dec. 19, 2017–Two men, Peter Schmidt, 37, and Carlos Lopez, 33, were charged with drug trafficking and possession of a firearm and ammunition, when they appeared in court today before Senior Magistrate Aretha Ford.

They pleaded not guilty to the charges. They were remanded into custody until March 8. Schmidt gave his occupation as that of a fisherman, and he said that he resides in Caye Caulker. Lopez said he is a land consultant and he lives in Lords Bank Village.

They were busted on Sunday, December 17, when police intercepted a white 4-Runner in which they were sitting on Piper Street in Buttonwood Bay. Police reported that a search of the vehicle resulted in the discovery of 5.07 kilograms of cocaine along with one 9-millimeter pistol with 11 rounds of ammunition in its magazine. Schmidt was represented by attorney Ellis Arnold. Lopez did not have an attorney.