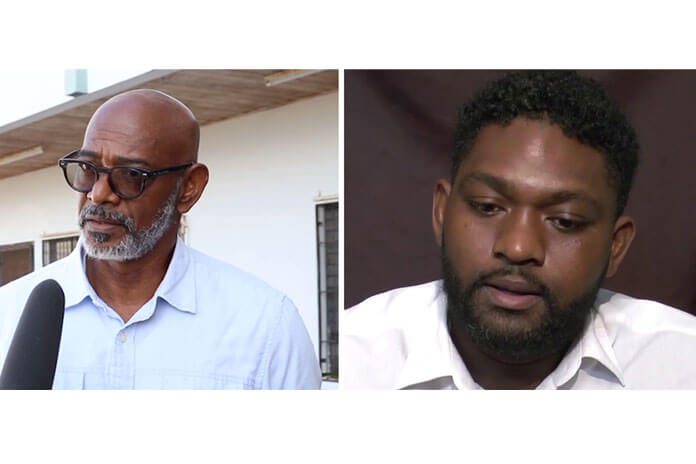 COTTON TREE, Wed. May 20, 2020– Many aspiring first-time land owners are unable to get a piece of land. On Sunday, May 17, a large group of landless Belizeans braved State of Emergency regulations and journeyed to Mile 44 on the George Price Highway to get their names written down in a bid to secure a piece of land out of a large plot that was said to have been abandoned by its owner, who had died as an intestate person.

The move on Sunday was spearheaded by the Harmonyville land activist Nigel Petillo. Police eventually dispersed the crowd, which had gathered in the hopes of securing a piece of the 2,500-acre piece of land.

Attorney Arthur Saldivar, who had gone to the Belmopan Police Station on Petillo’s behalf, was also arrested, for not wearing a mask in public when he stepped into the police station.
In an interview that was aired on 7News last night, the former Governor of Belize Central Bank, Glen Ysaguirre, and his son, Jaraad Ysaguirre, an attorney, claimed to be representatives of the Belmopan Land Development Corporation, which is the purported owner of the parcel of land.

The land in question had been reportedly locked up in a court battle with government, which has acquired half of it for a public purpose.

Speaking as a representative of the Belmopan Land Development Corporation, Glen Ysaguirre told 7News that his concern is that what he considers private land is being claimed by a large number of persons.

“…I mean, I could understand what they want. The issue for me is I am a representative of the owner of the land, Belmopan Land Development Corporation, and our concern is that is private property with ownership, and we intend to assert our ownership over the land and protect our rights in that land,” he said.

Jaraad Ysaguirre added, “We understand that people have some desire or intention with the land, but we want to emphasize that it’s privately owned, and we would have to take all necessary steps to exert our ownership and our intention is not to take anyone to court, but if it comes to that, we will have to do what is necessary, because it’s privately owned land; it’s not a vacant piece of property that is just there.”

Both father and son insist that if it becomes necessary, they will take court action against trespassers.

In a press release, the Belize Grassroots Youth Empowerment Association (BGYEA) has distanced itself from Petillo’s action on Sunday.

BGYEA, however, “strongly denounced” Petillo’s arrest and said, “…We emphasize deep concern for the persecution of people who are challenging the status quo, which inadequately provides for so many of our people.”

The release ended by stating, “BGYEA remains in solidarity with Belizeans obtaining land, but advises our fellow citizens, and especially our members, if you are out in public or partaking in the Mile 44 project, please wear your masks and maintain social distancing to avoid arrest, charges, or infection.”