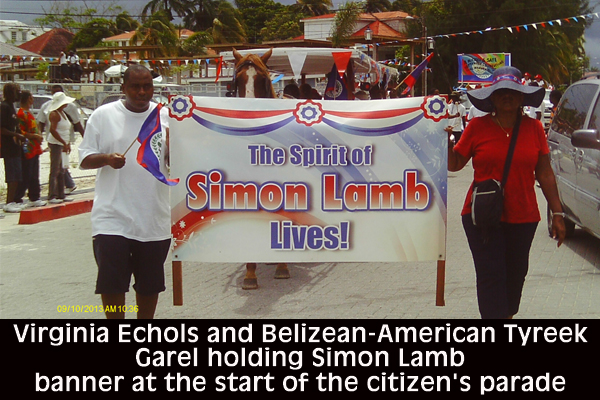 A special tribute and wreath-laying ceremony was carried out yesterday, September 10th, during the annual celebrations of the Battle of St. George’s Caye, for a man who is described as the most patriotic Belizean of his era.

A modest Belize City tradesman by the name of Simon Lamb (1833-1914) is acknowledged as the individual who singlehandedly kept observance of the Battle of St. George’s Caye on September 10 alive, after it had fallen into obscurity among the populace.

In 1898, he organized the first celebration marking the Centenary of the historic battle of St. George’s Caye on September 10, 1798, thus earning the title “Father of Nationalism” in British Honduras, which later became formally known as Belize.

For the last five years, efforts have been made by a group of similarly patriotic Belizeans to pay tribute to this unsung hero and remind the public about the legacy of Simon Lamb. Their purpose is to highlight Lamb’s role in keeping the Tenth Celebration alive at a time when his role is almost all but forgotten.

The group of organizers, led by Virginia Echols of the UBAD Educational Foundation (UEF) and Muriel Laing Arthurs, of the Belizean-American Friends of Simon Lamb, believe that Simon Lamb deserves to be continually honored, hence the need to remember Lamb’s founding of the annual celebrations.

Ms. Echols told Amandala that this is the 5th year that they have been recognizing the ‘Centenary’ founder. She explained that she got involved when some Belizean-Americans came to her and asked for her assistance to spearhead a tribute to Simon Lamb whereby a wreath would be laid at his gravesite in his honor. She then took it a step further and decided to also conduct a procession from downtown Belize City to Lamb’s grave at the Lords Ridge Cemetery. She said that this tribute would normally take place on September 9th; however, this year, they made a decision to incorporate the tribute into the citizen’s parade on the 10th, because Simon Lamb is actually the person responsible for the parade. Ms. Echols told us that their intention was to march along with the parade, and then make an exit at the corner of Vernon Street and Magazine Road and go to the cemetery to lay a wreath at Simon Lamb’s gravesite.

The other person at the helm of the annual tribute, Muriel Laing Arthurs, told us that she came up with the idea to honor Simon Lamb after she was informed that his grave was in shambles. After she came to Belize and saw that it was true, she and her husband decided to renovate the gravesite and conduct the first tribute five years ago.

The following year, she said, some of her Belizean-American friends supported the initiative and came on board to support. They then managed to procure a plaque to place on the tomb. She explained that it’s a joy for her to play a part in the tribute and she felt compelled to participate because her great grandfather, Alexander Dunn, was part of the group that marched along with Simon Lamb.

After taking part in this year’s citizen’s parade, the group made their exit at the corner of Vernon Street and Magazine Road and proceeded towards the recently restored gravesite of Simon Lamb, where they conducted a brief wreath-laying ceremony and sang patriotic songs to honor him.