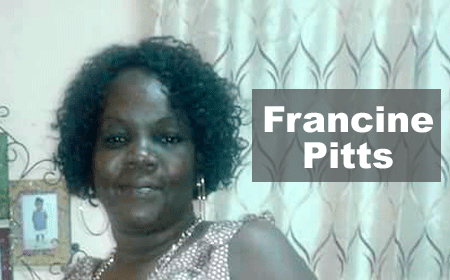 BELIZE CITY, Mon. Aug. 14, 2017–Francine Pitts, who was employed as a tax collector for the Belize City Council, was pronounced dead on arrival on Saturday, August 12, at the Western Regional Hospital.

The mother of 6 children, an asthmatic, Pitts was found unconscious on the floor of her mother’s house in Mahogany Heights. She was rushed to the Western Regional Hospital by her son, Eandre Nunez, 17, but was pronounced dead, one of her sons, De’ Zhaun Humes, 22, told Amandala tonight in a telephone interview.

Although a post-mortem exam has not yet been performed on Pitts’ body to determine the cause of her death, her son, Humes, is of the view that their mother died from heart failure and an asthma attack.

Pitts first came to the media’s attention in September 2010, when her 8-year-old daughter, Eyannie Nunez, was shot and killed as she slept in the family’s Zericote Street home. Pitts’ house was riddled with bullets by an unknown gunman who had allegedly gone after Herman Garbutt, Pitts’ younger brother.

Then about one month after suffering the painful loss of her child to the senseless gun violence plaguing Belize City’s southside, Pitts would again be thrust into the public spotlight when an unknown arsonist torched her family house.

No one has been held responsible for the death of Eyannie nor for setting fire to Pitts’ family house.

Those two traumatic incidents were not the end of the troubles the single mother would have to endure.

On March 14, 2014, De’ Zhaun was riddled with bullets in the Jane Usher Boulevard area, where he was residing with his girlfriend. He had gone out to buy food at a nearby Chinese fast food shop when he was targeted by an unknown gunman who pumped four bullets into his body, leaving him physically challenged.

Funeral arrangements for the late Francine Pitts have not yet been finalized.