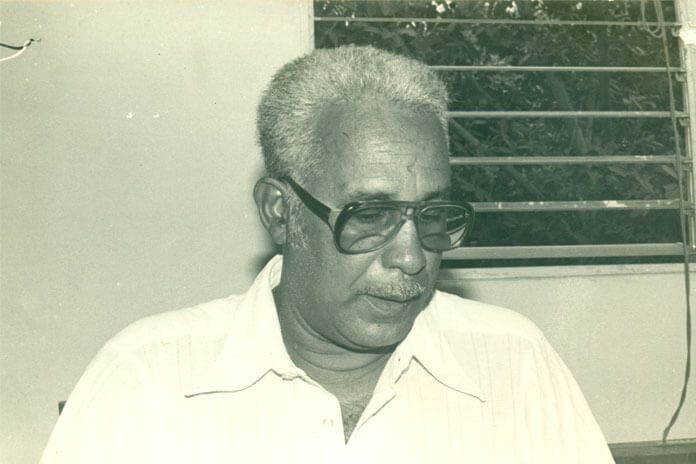 Continuing in our recent series on Creole leadership in the second half of the twentieth century, we now come to the man Dean Russell Lindo, an economist and attorney who founded the People’s Development Movement (PDM) in 1969, and then became the first Leader of today’s ruling United Democratic Party (UDP) in September of 1973. (Lindo resigned as UDP Leader following the UDP’s shock defeat in the 1979 general election.)

If you study the life and career of the late Dean Lindo closely, you will be forced to the conclusion that he was a selfish, self-centered individual. Married twice, to two of the most beautiful women in our lifetime, Lindo fathered one child, a son, Martin, with the former Eva Elizabeth “Betty” Fairweather, but the record indicated that he never paid that much attention to his only son.

I say that based on conversations with Odinga Lumumba, who became pretty close to Martin when Odinga was running the streets during the Heads of Agreement uprisings in 1981. Martin hung out with Odinga some, and Odinga’s impression was that Martin was lonely at the Lindo Church Street home. (Lindo and Betty Fairweather Lindo, his first wife, had already separated.)

It may seem contradictory to say, but the man Dean Lindo, selfish as he was, was one of the most popular men I have ever seen, especially in the company of males. A brilliant, insightful, witty man, he lit up any conversation in which he was engaged, and males were drawn to him like the proverbial moths to a flame. 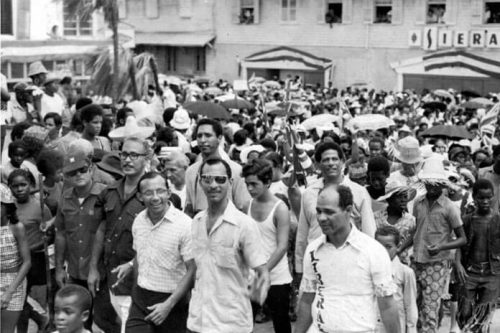 This brilliant, insightful, witty man, however, had very serious problems with alcohol, and some of the most effective ruling People’s United Party (PUP) election propaganda in the 1979 general election campaign featured a photograph of Lindo, the UDP Leader, sleeping off a drunk one Sunday morning on a bench.

On several occasions in this newspaper over the years, I have rated Dean Lindo the most brilliant Belizean politician ever, because he built a losing organization into a winning one. Dean Lindo was a cynical, analytical man with a mathematical mind. I never saw emotion in him.

When I was a child living on Church Street around 1954 or so, Lindo, who is my mother’s first cousin, slept at our home on a couch the night before he flew to Brooklyn to begin university studies in economics at New York University.

Returning home in 1958 or so, he joined the Unity Club, where he played cricket and cards and held court for a few years before he travelled to London to begin a law degree. My father, a Unity Club member, was taking me to Unity Club from the time I was 9 or 10 in 1956 and 1957. Dean Lindo was definitely one of my heroes at Unity Club. He was the wicketkeeper on the cricket team. My father has told me that he had also been a good football player.

On his return from law studies in England, Lindo rejoined Unity Club, the clubhouse for which had been destroyed by Hurricane Hattie in 1961, whereupon Edwards Parks, where Unity Club had been located, was taken over by the Government of Belize and renamed Rogers Stadium.

Did the Unity Club members basically move to Newtown Club and the Colonial Band Association (CBA) after Hattie? My stats are muddled, because I had entered puberty and was beginning to prepare for Cambridge Overseas Examinations around this time. What I do remember is that around this time, after Hattie, my hero uncle, Buck Belisle, took on the captaincy of the Unity Cricket Club and won the team’s only two championships, accomplishments for which I held him in great reverence.

Lindo and Buck “Jones” Belisle, first cousins, were very good friends, and, I think, a mutual admiration society. But, after Lindo challenged Philip Goldson for leadership of the Opposition National Independence Party (NIP) in 1969, a time when I was already president of the United Black Association for Development (UBAD), I began to feel uncomfortable around him, primarily because he had never identified himself with his blackness. (Dean Lindo was a light-skinned Creole.)

Insofar as the history of Creole leadership in my lifetime is concerned, it is interesting to note that C. L. B. Rogers at some point used to hang around the Lindo family, where they lived down Regent Street West at “Point.” This period probably explains why Rogers, a hard-bitten trucker and street man, first joined the middle class NIP in 1957/58 before he moved to the working class PUP in 1959, where he was a more natural fit.

Dean Lindo and I began a bitter hostility after 1973, when he essentially split UBAD in two, after defending myself and other UBAD leaders pro bono in court several times during the course of the explosive 1972 year. As slick as Lindo was, he used the young, ambitious Michael Myvett (Finnegan) to lead the charge against me on the rostrum and in the streets. Finnegan, who adored Lindo, did a great job of hatcheting me, and thus made his bones in the new UDP. The new UDP, after 1973, proceeded to teach me an unforgettable lesson in how absolutely powerful any of the two major political parties here can be.

I already knew how strong the ruling PUP were, how muscular, but the new UDP took the game of vicious politics to new levels under Lindo’s leadership. Let me give you an example of how cold-blooded Dean Lindo was, from his PDM days. In August of 1969, there was a fight in Harley’s Open Lot (Regent Street) between CIVIC, the Shubu Brown/Buntin Fuller/Allan Griffiths-led street arm of the NIP, and the young UBAD. Lindo, knowing I was pissed off at the NIP, sent his favorite taxi driver, the late G.P., to ask for time on the UBAD rostrum at Courthouse Wharf to attack Goldson. Inexperienced and careless, I agreed. The taxi driver went low down into Mr. Goldson’s married life. I was appalled.

A couple UBAD fans, Theola Turton and a lady named Bailey, lit into me for allowing the taximan to scandalize Mr. Goldson’s marriage. Yes, I had to accept the blame, but I hadn’t known what the taximan was going to do. The lesson I learned was: Dean Lindo was no one to fool around with. I suppose that was the quality to which Michael Finnegan was attracted, after all the losing NIP elections he had experienced helping his mother, Esme Diaz, during the 1960s.

It seemed there was no way Lindo’s UDP would have lost the 1979 general election. I know, because I was on the PUP side, and the UDP had Belize City under lockdown, based on the December 1977 Belize City Council election results. What happened between then and the 1979 general election? The great Dean Lindo, the greatest of the great, never became Prime Minister. What happened?