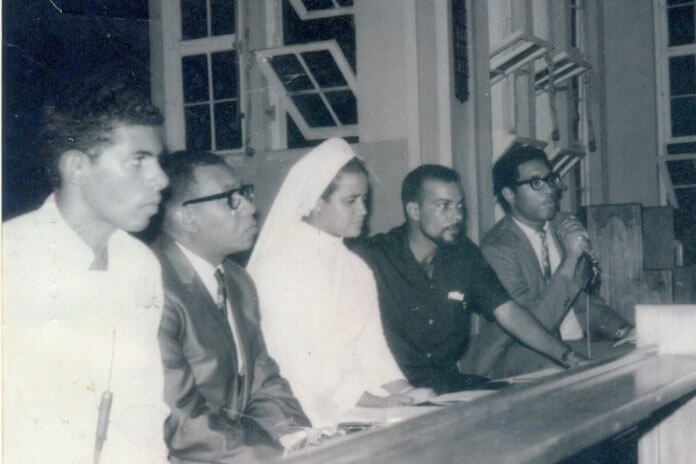 Virginia Echols, an African American lady who has been living and working in Belize for more than a quarter century, and has been active with Kremandala and our UBAD Educational Foundation (UEF) over those years, and I hadn’t talked in months, but this past Sunday morning we got to chatting after her Sunday morning religious show on KREM Radio – “Moments of Inspiration.”

Some years ago, it seemed to me that Virginia and Ya Ya Marin Coleman, who has been the chairlady of UEF for a dozen years or so, got to “beefing,” as we would say in the streets. The issue was basically religion, or spirituality, or whatever. Virginia, a former Peace Corps volunteer, is a ranking member of the African Methodist Church, which is a Christian organization, whereas Ya Ya is deep into African spirituality. Ya Ya views the various Christian denominations as too willing to collaborate with white supremacy, a perspective which we can trace all the way back to slavery, when one of the ships the British were using to transport our ancestors over here like animals was named, can you believe it, the Jesus Christ.

Ya Ya is a Belizean who migrated to America, as most Belizeans of color do, was married over there and was making a life for herself when she became radicalized while working and studying in Florida. She was deported from the United States for voting illegally in one of their elections.

With that said, I want to consider the subject that jumped out at the commencement of my conversation with Virginia on Sunday: it was African history, which was really the subject which contributed to changing my personal life around five and a half decades ago. As older readers will know, I was pretty much the average Belizean teenager of the middle 1960s when I landed in New York City in 1965 and travelled to New Hampshire on a State Department university scholarship. 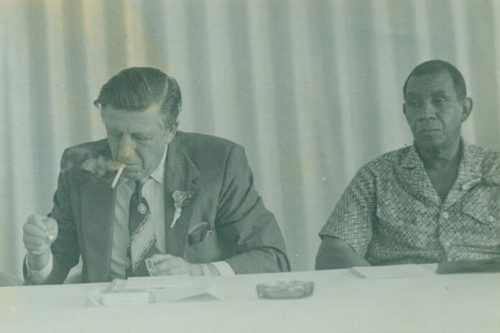 Gordon Roe (left) was an English accountant who came to Belize to work with Belize Estate and Produce Co. (BEC). In the 1960s, he became business partners with attorney Horace Young (right), and thus was laid the foundation of the insurance and business giant now known as RF&G Insurance.

Early on in college, I met a girl friend, Barbara Williams, now a Ph. D., whose father, the late Hosea Williams, was one of Dr. Martin Luther King’s lieutenants in the civil rights struggle. The American civil rights movement in 1965 was still into non-violence, a philosophy with which I instinctively did not agree. (It was in 1966 that Stokely Carmichael introduced the concept of “black power” into the civil rights conversation in Mississippi.) In 1965, I did not appreciate how much personal, physical courage it took for African Americans and their white supporters to absorb all the brutality they experienced in southern American states like Alabama, Mississippi, Louisiana, and so on when they were demonstrating. Today, I have surely gotten the sense. Sunday morning, the subject that jumped out at me and Virginia was African history, for the reason that next month is Black History Month.

I spent three years in a college dormitory single room in a small town in New Hampshire. In many respects, it felt like jail, and I did a lot of drinking of alcohol in order to survive the loneliness and homesickness. In Belize, I had had name recognition, because of family, academics, and just the fact of how small our hometown was and everybody’s knowing each other. Young ladies were interested in me. In America, I was absolutely nobody, and I didn’t have the moves or the lyrics to attract attention. This is the real. It was rough.

Serving out my time in jail, as it were, I stayed out of African American activism for a year and a half. I even joined an all-white college fraternity, mostly for drinking purposes. But my African American classmates, led by the one Woody Lee, risked their academic futures to demonstrate militantly against the segregationist Alabama governor, George C. Wallace, one night when he visited Dartmouth College to campaign for the Democratic Party nomination for the U.S. presidency. This was the winter of 1967. I felt I had to take sides with my African American brothers. From there, one thing led to another. (You can read my story in a 1971 book called North AmeriKKKan Blues.)

Before I left America, it appeared to me that it was vitally essential that our young black Belizeans should learn the history of our ancestors in the continent before we were enslaved in West Africa and transported to America. Personally, I did not embark on a course of studies where African history was concerned. It was urgent that I return home in June of 1968 to initiate the process of agitation for African and Indigenous history, but perhaps more important, to address the Seventeen Proposals of Bethuel Webster, an American attorney whose program, officially released in early 1968, proposed a Guatemalan satellite status for Belize.

March 5, 1970 will mark the fiftieth anniversary of my sedition arrest (along with the late Ismail Omar Shabazz). Looking back over the decades, I have come to believe that the most significant event in my public life was my sedition arrest, but such an opinion would not come as a surprise to most readers. The reason the sedition arrest jumps out at me after all these decades is because I now realize that I overreacted to that arrest, and the main reason I overreacted was because I had just come out of three years (1965-1968) in jail like conditions in college, and now the Government of Belize was looking to lock me up for a mere literary effort on my part.

I was determined, with the impetuosity of youth, to break out of jail if I was convicted and incarcerated. Thus it was that one thing led to another, and I was tried in the Supreme Court on criminal charges just months after the sedition acquittal. The second Supreme Court trial seemed unrelated to the first, but you would have had to be in my shoes to understand, beloved.

I want to say that as a result of the sedition case, I began to meet a lot of people who proved bogus down the road as the years and decades went along. These were Belizeans who were looking for someone to sacrifice himself or herself to bring down the People’s United Party (PUP) government of Hon. George Price, a government which had become an electoral juggernaut in the Jewel. Such Belizeans did not believe in the things in which I believed. They were just anti-PUP, pure and simple.

The thing is, brethren and sistren, fifty years later in Belize we are looking at issues which make the apparent differences between the 1970 PUP and the then Opposition National Independence Party (NIP) seem immaterial, or actually confusing. Put it another way. Consider the ruling United Democratic Party’s (UDP) recent approach to the Guatemalan question and the International Court of Justice matter. The UDP is the logical successor to the NIP. How come the UDP’s angle on Guatemala looks more like the PUP’s approach in 1970 than the NIP’s? How come the UDP, the successor to the NIP, which was a party that made Belizeans believe they were standing for and defending black people, really does not give much of a damn about African history? How you figure?

Feature photo: The week after the sedition acquittal in Supreme Court of Evan X Hyde and Ismail Omar Shabazz in July of 1970, the Wesley Methodist Church on Albert Street held a public discussion which featured (from left to right) X Hyde; the Methodist icon, attorney Horace Young, Q. C.; Sister Caritas Lawrence, a Roman Catholic nun; Rev. Coleridge Barnett, a Methodist minister; and Eddie Laing, Jr., an international lawyer. Sister Caritas, Rev. Barnett, and Eddie Laing all had testified as witnesses for the defence in the sedition trial.