The people at KREM Radio do not take lightly the continued support for their food fund raisers which come from the Belizean people. We are very grateful. KREM Radio has been struggling to survive for a long time. 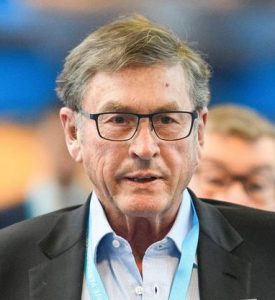 We need to examine the media landscape in Belize closely, because I think it is a sensational landscape, sensational because of its proliferation of institutions over the last three decades, and because the players include such gigantic personalities as Lord Michael Ashcroft, the Prime Minister and the ruling party, the leaders of the Evangelical faiths in Belize, the national radio monopoly, and others who are fronting for just whom we can’t be sure of.

Now, my Belizean people, it is entirely impossible for our roots interests as Belizeans and those of the British billionaire to be the same. The history of the last three decades has proven this in an utterly conclusive manner. But Lord Michael Ashcroft’s television station is run in an extremely professional manner, so that the opinions expressed on Lord Ashcroft’s station, as much at variance as they are with our roots interests, have an audience in The Jewel. There is no doubt about it.

This journalism business is serious business, because journalists are messing with the truth in many instances. In a Third World country like Belize, the politicians have to make deals to assure their campaign finance supply lines, and for this reason and others, it is usually impossible for politicians to tell us the truth full bore. This is where the journalism profession enters the picture, and the strength of a nation-state’s journalism profession is in almost direct proportion to the functional strength of its democracy, democracy being defined as “government of the people, for the people, and by the people.”

I am saying to you that we Belizeans deserve commendation for having established and made possible the continued existence of the Kremandala institution for more than a half century. I salute you. You have to understand that journalists, beginning with the newspaper business, are writers, and the average writer is not a physical specimen, like a boxer or a soldier. If the people of a country do not protect their writers and journalists, their writers and journalists will be beaten down by the nation’s power structure – its corporations, its Mafia dons, its bankers, its military and police, and so on and so forth.

I had an African friend who died on an emergency operating table for an appendectomy about fourteen years ago. Guy Mhone was an economics professor in a South African university at the time. It seems to me that Mhone had been a student anti-apartheid activist in 1965 when a humanitarian organization succeeded in getting him out of Malawi (formerly Nyasaland) before the President, Hastings Kamuzu Banda, could lock him up, or worse, kill him. When I met Mhone at Dartmouth in September of 1965, he was 22 and I was 18, a real babe in arms politically compared to Guy.

Anyhow, I was going through my old papers a few weeks ago, and I found this letter Mhone had written me in 1978, 42 years ago. After graduating from Dartmouth in 1968, he had had no choice but to continue on to graduate school in the United States. The liberation of Zimbabwe in 1980 was the first development in southern Africa which changed Guy’s situation.

Here is what Guy Mhone wrote me in 1978: “I am still constrained from travelling by the fact that many African countries will not accept a permanent residence document for a passport, and since I am perfectly assured detention if I went to Malawi, I have simply been compelled to hang around here in pursuit of petty bourgeois aspirations!”

Mhone went on, “Of course I envy you a lot and I admire you for having gone right back into the struggle and I am dying to hear what you have been doing since.”

Before the letter, Mhone had heard on the grapevine that I had been imprisoned, and even that I had been killed. The Seventies were that kind of time. The point I want to make is that I didn’t go to jail, and I was not killed, because of you, the people of Belize. Needless to say, beloved, my appreciation for your backative is total.

I became a serious student of Guy Mhone after the winter of 1967. He was the coolest, most pleasant brother you can imagine. His life had been placed in uproar in Malawi in 1965 because he opposed the Uncle Tom politics of President Kamazu Banda, who was supporting the apartheid regime in South Africa at the time. From Mhone, I learned about Nelson Mandela, about Hugh Masekela, about Miriam Makeba, and, I guess most importantly, Malcolm X. Even though I am a mulatto, I became an African spiritually. And that’s how he and I called each other – African and mulatto. One love.

A couple weeks ago some students from the University of Belize made a leap of conscience, defying the government-controlled administration. This was what Guy Mhone did in 1965, and he paid for it with exile from his home country for more than fifteen years. Let it be known that Kremandala’s support for the militant UB students is absolute. We owe you that, UB students, because of the sacred memory of Guy Mhone, and because, before your time, the people of Belize made it possible for us to be born and to survive, fifty years and counting. Respect, Belizean people. Respect, every time.