“Starvation is not nice;
Creole must plant more beans and rice.”

“This young generation knows nothing about theatre. They do not know about Shirley Warde’s BOSS KING nor George Gabb’s YELLOWTAIL. They never got to see Cousin Winifred, Gwen Murillo nor the late George McKesey on stage. They never saw a good set design by the late Nacho Valdez nor one of those splendid ballets performed by Mrs. Valdez’s Dance School. What they know about Bob Reneau, Daphne Sheran and Ted Burrowes is what they heard from their parents. Worst, they never got to see nor feel nostalgic when the great red curtain opened and closed at the Bliss nor shared the images captured by the effective lights designed by Brian Hall and Anthony Christie.

“Yes, more than half of Belize’s population was only four years old when the Square Peg Players had their last major production, UNO TWO MEK WE TWO. What have they missed? A hell of a lot, my grandmother would say. Not only an opportunity to be educated and entertained, but also the discipline of what good theatre demands and develops.

“The plays presented in this book are a legacy of Belizean theatre. These plays reveal the fact that Belizeans, up until the early 80’s, did indeed have a theatrical impulse, an impulse that Johnson wrote about in perhaps the only book published about Belize’s theatre.” 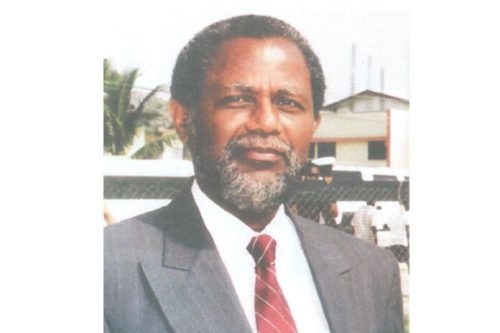 Generally speaking, the last nine weeks have been very boring for most of us Belizeans, because American cable television already wasn’t doing much for us, creatively and relevantly speaking, and the coming of the coronavirus meant the death of television sports entertainment in the United States and Europe. Those nine weeks should have been a time when our Belizean creative material, in the form of our local theatre, was blossoming anew, or, at least, being rescued from the archives.

One of the problems in our little Belize is that, for various reasons, the people who have money here do not support the arts. When you see the artistic works of the Italian Renaissance by geniuses like Raphael and Titian and Michelangelo and da Vinci, you have to remember that these people had patrons, Italians who supported them financially because they appreciated and treasured the works of their artists.

In February of 2017 when the great Pen Cayetano organized a tribute for me in Dangriga, I mentioned to the audience that I considered music the greatest art form. So, I want to pay maximum respect to Sir Colville Young before I proceed, because I consider him Belize’s greatest writer/musician. ‘Nuff said.

I want to discuss one of my own literary works today. It is a play entitled Haad Time, which was written for production by Wesley College in the 1971 Festival of Arts. The play was a Festival winner, and very popular with audiences, especially young ones.

The play was directed by a British volunteer teacher named Liz Mildner (where are you, Liz?), and the sets were designed by the incomparable George Gabb.

Personally, I had a role to play offstage in the production at the Bliss Institute. I had a sound system, which I would take to the Bliss, and then play the appropriate music at specific points in the play. Unlike Sir Colville, I have no musical ability. So, I was playing recorded music, by such as Otis Redding, Barrington Levy, Percy Sledge, James Brown, Ray Charles, Gerald Rhaburn, and Nelson Diamond.

The brief success of Haad Time was what stimulated me to attempt the significantly more ambitious Weh John John Deh? in the summer of 1972, but I had already left the Wesley College teaching staff when I began writing John John, and so I had lost the social respectability I’d acquired when I began teaching at Wesley College in August or September of 1971.

John John, the teenaged protagonist in the 1972 play, kills a policeman in a gambling game, and is later shot down by the cops. I always thought John John foresaw, in a literary sense, the 1974 murder of the rookie policeman Aguilar by Hani Robinson on the Belize Swing Bridge. But, if you accuse me of egotism on this score, I surely would have to plead guilty.

Infatuated with the creative process involving John John, I left Haad Time in my wake and never looked back. In light of the relevant socio-economic developments involving the coronavirus, however, it struck me, glancing over the script of the disrespected Haad Time, that the “going to the country for rescue” theme in the 1971 play which ran through the tale of the teenaged Belize City lovers, Errol and Cynthia, was relevant then, and oh so relevant now.

At the beginning of this column, I quoted from one of Dr. Young’s most popular songs, but I don’t have any idea when it was written, Dr. Young’s creative mood at the time, and so on and so forth. I consider his lines absolutely prophetic, and humbly request that he publicly discuss his thinking on the matter. The Governor General’s position is so exalted, however, I am not optimistic. If Dr. Young reasons that the brilliance and visionary beauty of his musical creation represent enough of a gift for us Belizeans, let it be. Respect, Sir Colville.

The Garifuna people of Belize are not loyal to the Creoles. But, they have no reason to be. From the time the Garinagu came...
Read more
Publisher

A friend of mine from the diaspora (a septuagenarian like myself, incidentally) e-mailed me to say how much he looked forward to my post-election...
Read more
Publisher

“Ultimately, President Ydigoras Fuentes became convinced that his ace in the hole would be the results of his meeting with President John F. Kennedy. According...
Read more
- Advertisment -